(And some non-mushers I know who have these things down.)

Being a musher is a foolhardy endeavor. You have to have a dash of crazy, a lot of masochism, and a love for “fun” that bears no real reward until after it’s over, when the memory of the intense amount of work you put in is well glossed over, and all that remains are sweeping landscapes, enduring bonds with your dogs, and the rush of conquering a dream.

So how do you get to that feeling? Not everyone can do it. Here is a list of some of what (I think) it takes to be a musher:

My mushing mentor, Martin Buser, has always said: “A good musher can sleep anywhere.” I used to be a pro at this! Now in my old age, my skills are waning. In a 300 mile sled dog race, you can expect a musher to get, at the most, 5 hours of sleep (if they are racing). This last Copper Basin, I got about an hour of sleep total! The other goal is not to fall TOO much asleep on the sled! 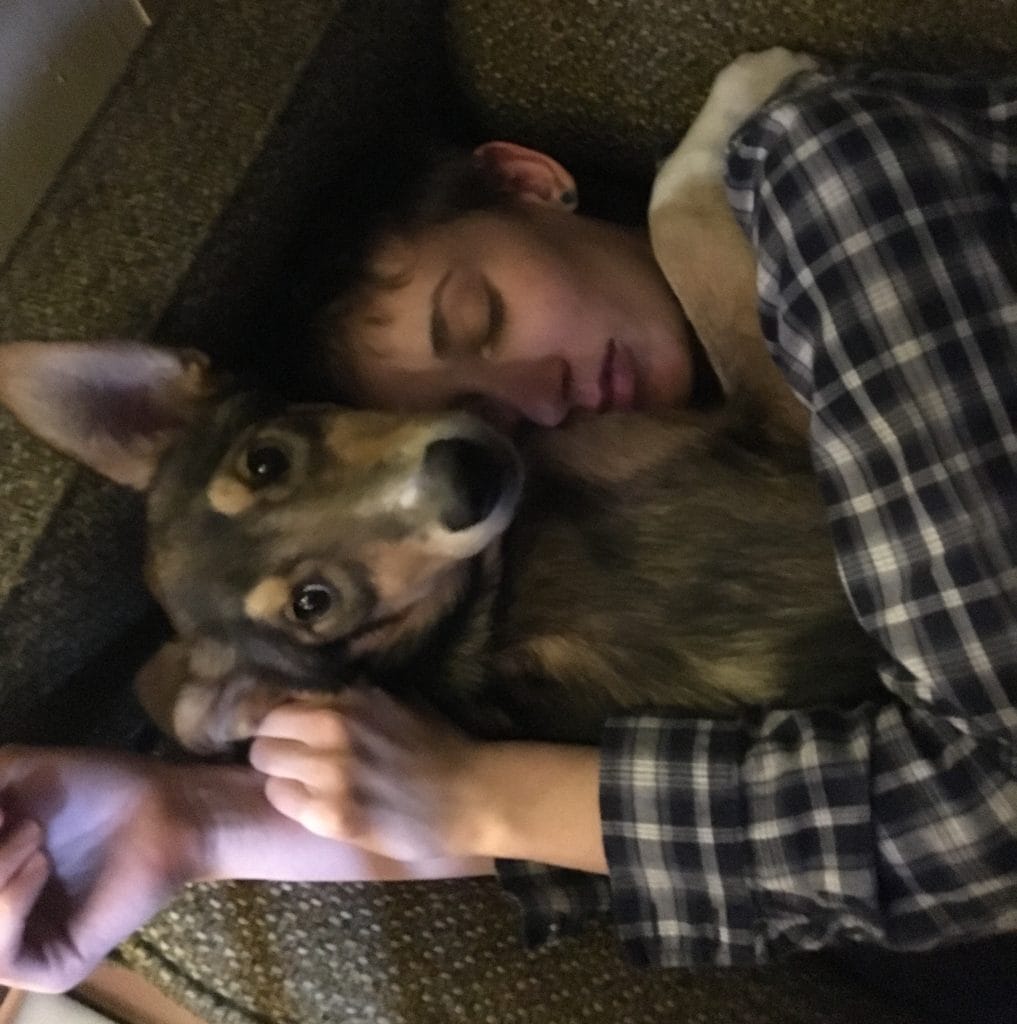 One of the best sleepers I know is none other than Shawn Goggins! When Shawn wants / needs to sleep, there is nothing stopping them! Not only that, but they can sleep through… anything! Shawn also matches some of the other criteria on this list, like hard work and compassion. But in sleep skills, they outshine the world. It’s pretty incredible the shenanigans that I have seen go on around Shawn while they contentedly snooze. I aspire to reach this level of pro sleeping… One day I will!

Despite what some may think, mushing is not a lazy sport. For all the hours you spend standing on the runners (which is not a cake walk either), you spend just as much time doing chores, including everything from feeding dogs and scooping poop, to moving heavy stuff (like food, straw, dog houses, etc), to clearing trail, to hauling water, and on and on. 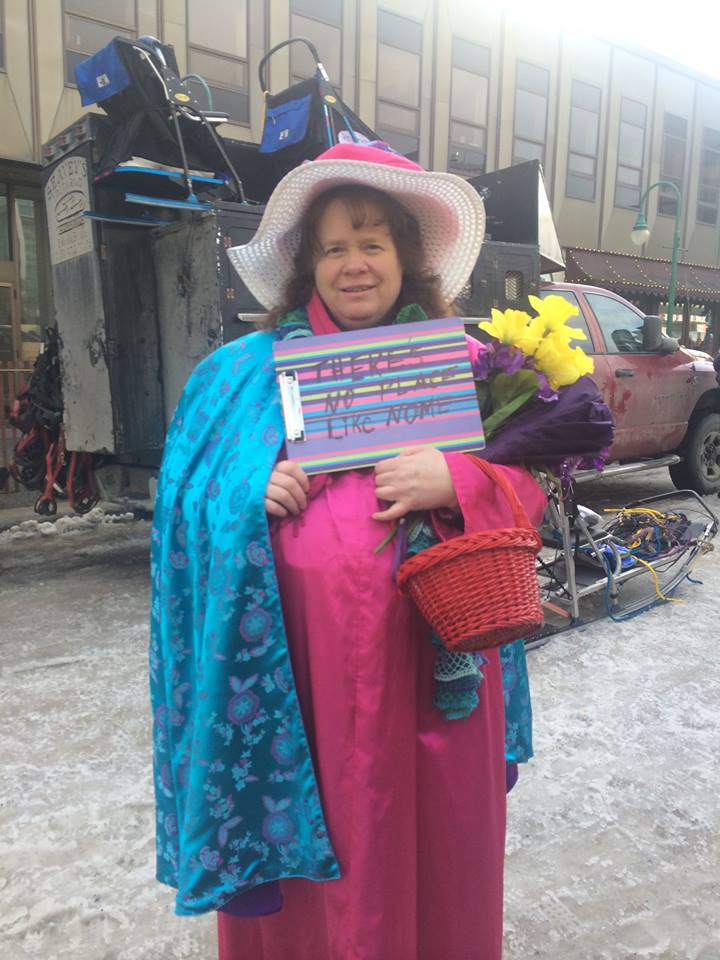 My mom is one of the hardest working humans I know. She could probably fit into almost any of these seven things except, perhaps, the next one. Mom wakes up as early as one am each day to get to her school, where she works until late hours. The charter school she started with three other teachers about 20 years ago has been her passion, and she’s poured thousands of hours of sweat equity into it. Mom’s break comes in the summer, but after about two days of catching up on sleep, she usually hits the road, driving thousands (I feel like Mom likes things in thousands) of miles each summer to visit friends and relatives. If I even manage to work as hard as my mom, I’ll accomplish whatever I set my mind to. I hope I can pour as much dedication into my kennel as my mom has into her whole life.

Tolerance is not affinity or love. People seem surprised that mushers don’t often actually enjoy the cold. In fact, many mushers I know hate it. What mushers can do is get through it. The coldest temperatures I’ve been out in is -60 Farenheit while racing in the Northern Lights 300 in 2012. But I’ve been in -10 that has felt colder! It all depends. Good equipment is key– But at a certain point, you have to just settle in and accept that cold is the new reality. As they say. Winter is coming. 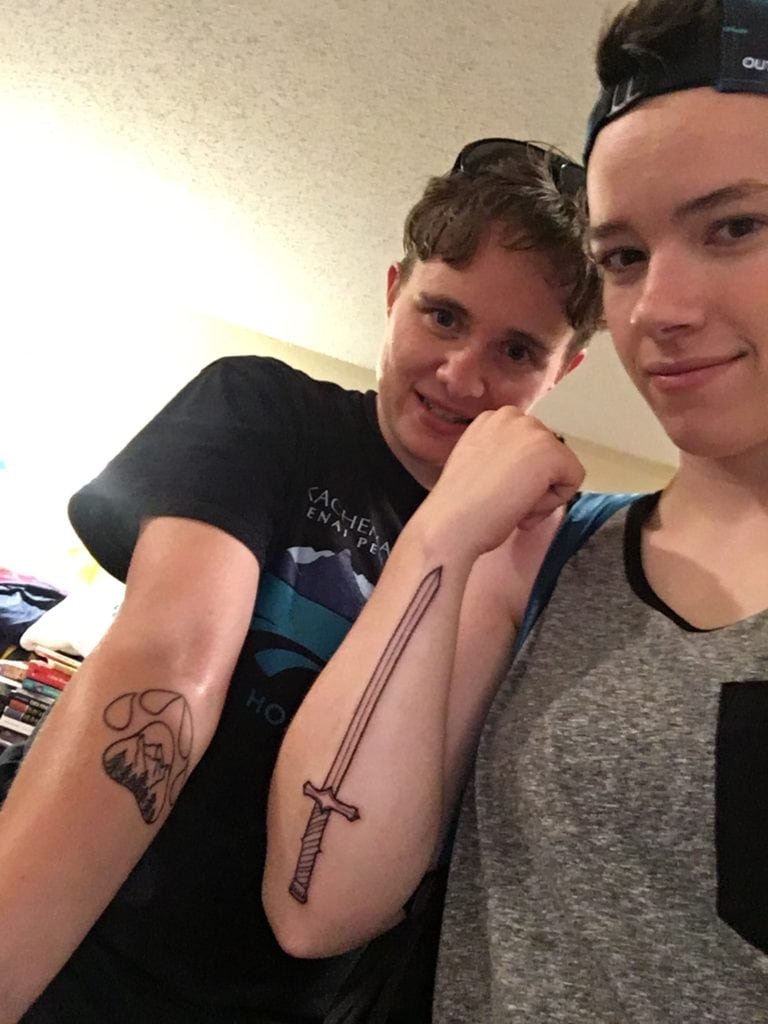 Like many of the cool people on this list, our good buddy Arthur could easily fall into more than one category. They are patient, hard working, and very kind. They are also one of the toughest characters I’ve met. I won’t go into details, but Arthur sticks through stuff, physically and mentally. I don’t know about their cold tolerance– But when things have gotten rough, I have seen them over and over again dig their heels in and stick it out. If cold was what they had to face, they would. I have no doubt. Arthur has been one of the most stalwart friends we could ever ask for. Even though Arthur is a youngin, I look up to them every day, and hope I can aspire to be this tough.

You can get into a lot of tough scrapes while mushing. This can equal big tangles where the whole dog team has decided they are all in love, or getting lost, or having equipment break down. In any of these situations, it’s important to keep a level head and continue problem solving until you find a solution. Hey! That’s like life. 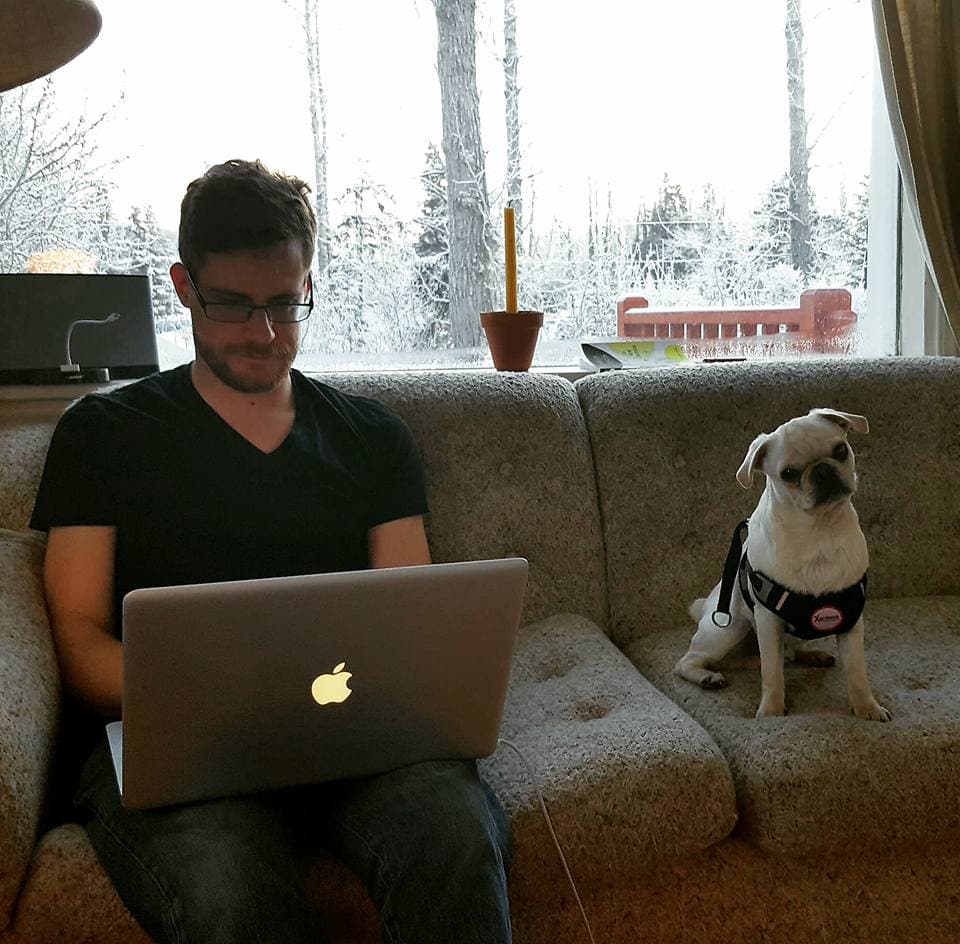 To work with me, you have to be patient, right? Or, at least, you have to be patient to troubleshoot the many computer, user, and other issues my boss Michael deals with every day. So yeah, his job qualifies him for this– but I’ve also seen him with his very new baby, and with frustrated friends, and with friends in need; and in any situation, Michael is calm and ready to work through a logical series of steps to help mitigate the issue. He always has a smile on his face and a belief that he can solve the problem. This is exactly the outlook you have to have on the runners– And Michael would know, as he’s done some mushing himself. I am not always so convinced of my ability to troubleshoot, but I’ve managed to hang onto that belief on the runners at least, and I always think of Michael when I’m in other situations, and hope I can hang onto that patience and “what’s next” attitude.

20 hour work days are not uncommon while mushing– Especially when preparing for a race. Once you get to the long miles (and especially if you are training more than one team), you’ll be out on the runners or doing chores for the majority of your day. I have worked 39 hour days before, and I expect to be doing far more than that in preparation for Iditarod. 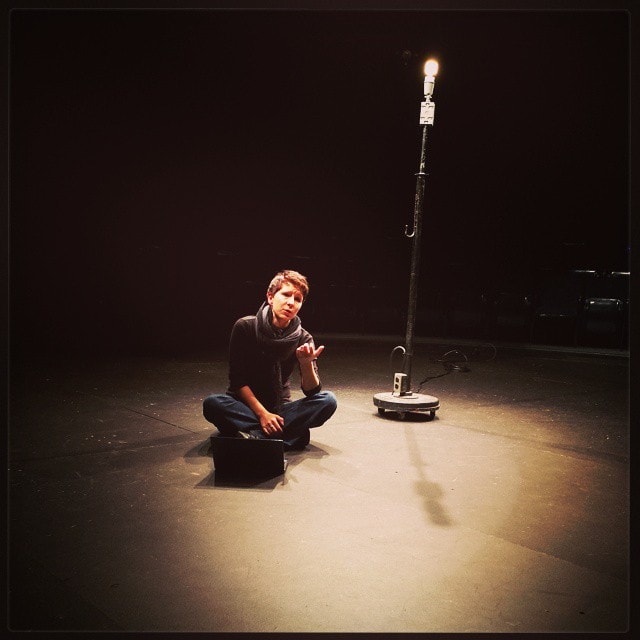 If there’s anyone I know who can give mushers (or my mom) a run for their money in how many hours they work per day, it’s Leah Adcock-Starr. Leah is one of my oldest and dearest friends, and in college we spent a lot of late nights in the box office as Leah completed a project or prepared for a show. Leah is a kickass director in Seattle now, working a day job, directing for various companies, and running her own company, Off Road Shakespeare Company. Leah, I have always thought, would be a good musher: she pours herself into her work, believes deeply in putting animals first, and is tough as nails. She isn’t at all fond of the cold though! But as far as long hours go, Leah might take the cake.

Mushers like a dog who eats a lot and always. But mushers need to do that too! When your chance to eat comes around, just like sleep, you better take it! Your food might be half frozen McDonalds burgers (that’s what one musher sent along the trail in Iditarod one year), but it’s calories, and you need it. I haven’t yet figured out how many calories you burn while doing all the work of mushing, but it’s a lot. A handler I worked with one year lost so much weight he started putting mayonnaise on absolutely everything he ate. That was the year I ate tubs of cookie dough (raw)(unadvised!), and lost weight too. 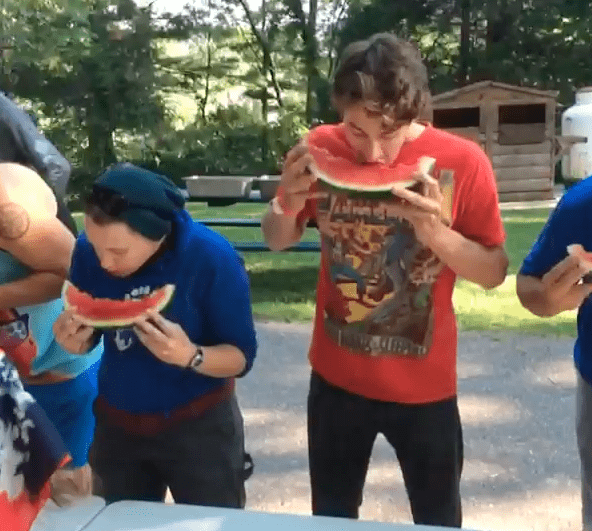 I’m not terrible at eating. I can down a good meal and then eat some more. However, when it comes to respecting the amount (and odd types) of food a person can eat, I have to look to Shawn’s brother Timmy. I have seen Timmy consume odd food on dares from Shawn (this is a thing they do), but I have also seen him clear his plate of vast quantities of food and ask for more. Timmy actually reminds me a little bit of the handler I worked with who put mayonnaise on everything– Not because of mayonnaise but because of how much he can eat. I have great respect for Timmy’s skills of consumption and will think of him when I need to down a quick meal on the trail that may or may not be palatable.

7. Compassion and the ability to put your dogs first, always

This, to me, is one of the most important qualities of a musher. In everything you do, dogs are first. They love to run– But they are athletes of the highest caliber and as much work as you might be doing, you’re just the coach. Your number one job is to facilitate the dogs’ health and well being so they can do what they love to do! Make sure they eat first, are comfortable and ready to sleep first, have any of their sore muscles massaged and tended to, and get love and praise for the work they’ve done… THEN you can: go pee; get food; consider sleeping. 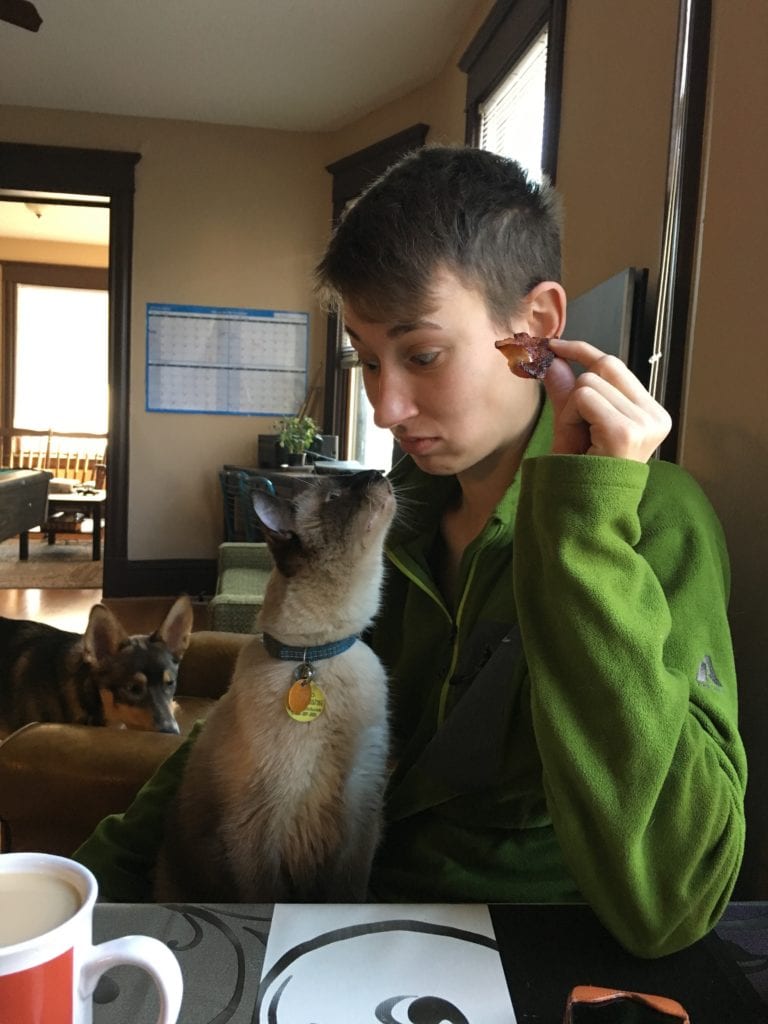 This one has to go to Shawn, as well. Yeah, Shawn is a great sleeper, but to me, their most important quality is their giant heart. This is immediately clear around animals– of almost any kind. They say dogs are good judges of character. Hooch is normally fairly shy (although after her winter in Minneapolis has opened up quite a bit!). On meeting Shawn for the first time, Hooch didn’t hesitate a bit to go up and say hi. That was a pretty big sign to me. Over the last year, I’ve seen Shawn with a myriad of animals, from cats to dogs to horses. With all of them Shawn is generous and loving, and puts their needs first. This is gonna be key in building a kennel together, and I couldn’t ask for a better partner in crime.

There are certainly some other qualities good mushers possess– a sense of strategy? Do I have that??– and tolerance for gross things (I definitely have that!), but these are some of the ones that ring out to me. I’m grateful for the folks in my life who inspire those qualities in me, and I’ll be thinking of all of them as I carry on down the trail. 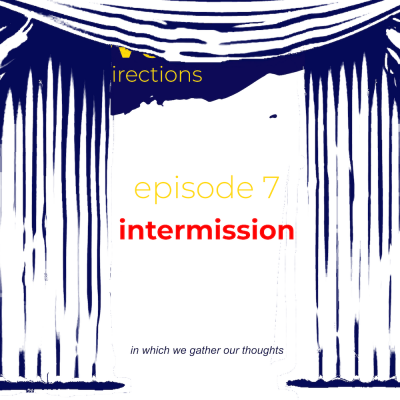