It’s hard to believe… But the team at ATAO Kennel is complete! (For this winter at least.) We are so excited to announce the final additions to the kennel for our founding year. Before I do, I want to explain a little bit more about my philosophy and the way I’m setting up my kennel.

I am not in mushing to be competitive– not with anyone else, at least. Don’t get me wrong… I’m a competitive person and I want myself and my team to do the best we can. But winning races is not my reason to mush. The reason I mush is because it feels correct. It feels like things are aligned. It feels like all is right with the world.

A big part of that, for me, is the bond with each and every dog on my team, and the investment I give them. That’s investment of time, training, and cuddling. Seriously. Positive contact is important. It gives us a sense of being together, being bonded, and being on the same team. It reinforces that we’re all a pack.

I have a lot of room in my heart and I could welcome all the dogs in the world to be loved. But I also want to make sure I am able to give each of my dogs, individually, as much of my investment as I can. I believe that will allow dogs to excel. Although, again, “excelling” is just a cool side effect of having dogs who are loved, well-cared for, and connected with me and with each other.

To the end of investing as much as I can towards each dog, it makes sense for me to keep a small kennel. An Iditarod team is 16 dogs. I have 14 dogs currently, including my puppies. Two of my dogs are older, and have already run many Iditarods. They are heralding the next generation in, but their official job now is to keep the couch warm and enjoy their retirement– so they won’t be included in my Iditarod race group in a couple years. It’s important, like in basketball, to have a “bench” of dogs you are training, because along the way, just like for human runners or other athletes, team members can potentially incur small injuries that will take them out of training.

It is my plan to have no more than 20 dogs in race training. This is a group that I can feasibly train by myself (I have no handler). Next year, I’ll have another small group of puppies who will bring me to that number, and after that I will focus exclusively on my small group. Each and every dog in that group will know me well, and I’ll know them. We’ll train together, play together, and race together. The sense of belonging is enormous, and so gratifying.

My initial plan this winter was to only have puppies (and Hooch and Ophelia). But when someone asked what I was going to do to keep Ophelia happy and well exercised, it crossed my mind that it would be good to have one or two dogs who could make up a tiny team. While freeplay is great, huskies love to RUN and they love to run together and they love to pull things. I could run, myself, with Ophelia dragging me around, but after a winter of doing that in the city, I knew I would have a breaking point and that it wouldn’t be enough for her, still. Plus, Ophelia grew up a single child, and I felt like it was important for her to get a sense of team and pack. Aaaaand… I knew it would be really difficult to be around mushing in Two Rivers (a major mushing hub), and not be mushing. So I started looking for some yearlings and young dogs. I found out Bonnie was looking for a retirement home, and knew she’d be an awesome puppy trainer– Plus I love that dog and wanted to give her a good couch for all her hard work. I found Annie and Nala, bringing my total adult group up to 5. This was enough to start mushing with, and we have been running regularly. I also got the Star Wars puppies.

A funny thing started happening in this process. Obviously I already had Hooch and Ophelia, two females. Bonnie made three. Sometimes female huskies don’t get along the best, but Bonnie settled in fine, and overall there was no problem.

When I made arrangements for the Star Wars pups, I was offered 3 more females. Well, this is funny, I thought– But also, I figured– It doesn’t matter to me! Some people believe male sled dogs are superior (some people believe male people are superior, too, methinks). I don’t agree with that. Something I love about mushing is that it defies gender barriers. I have seen excellent dogs both male and female. If I was to list to you all of the very best dogs I’d worked with, I really believe the gender breakdown would be evenly split. And in mushing, men and women compete on equal footing.

Annie came to me because she was female, and the kennel she came from didn’t race females. Perfect. Nala was offered to me not for that reason at all, but by then I was sensing a pattern… And why not go with it? If people can race an all male team, I can totally race an all or primarily female team, and I bet we’ll do just fine.

That worry about females not getting along came up. But I think that could be an element for any group of dogs working together, and to me the key there is socialization and free play. I will tell you now that my group of five girls gets along incredibly well. We freeplay together, run together with zero issue, and are building that sense of pack. I keep calling the kennel the Themyscara– the Amazonian Isle from Wonder Woman. By accident, it kind of is.

So now I’m intentionally looking to build an (almost) all-female kennel. I have two exceptions (three if you count our pet dog Jessie), but we’ll endure them (by which I mean we love them and overlook their “shortcomings” for this reason). (They are R2 and Mad Max, both puppies.)

Let me introduce the newest faces to the kennel: 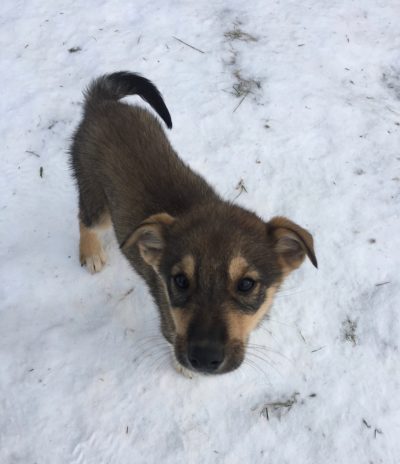 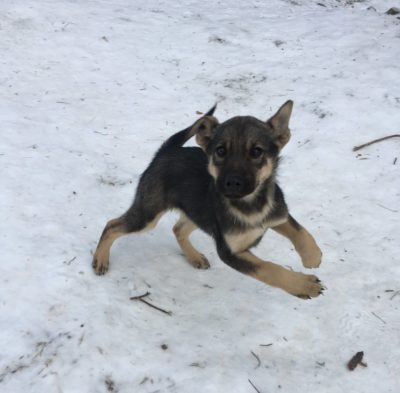 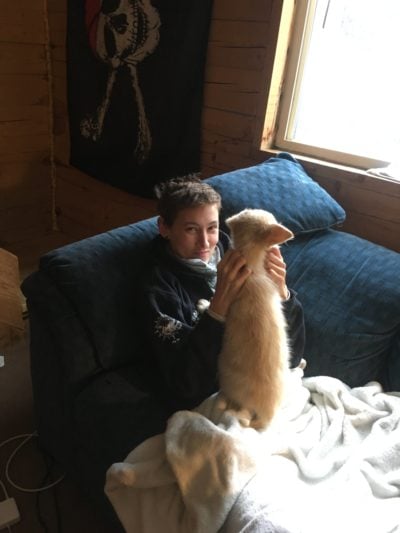 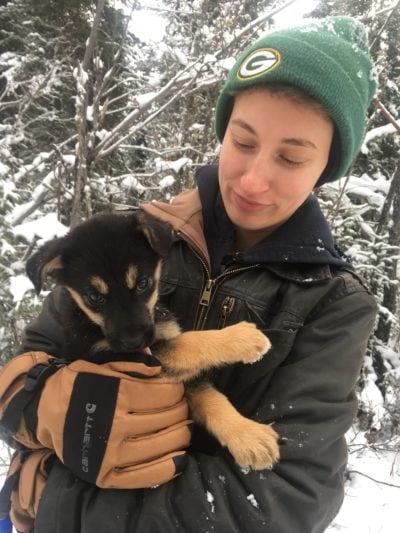 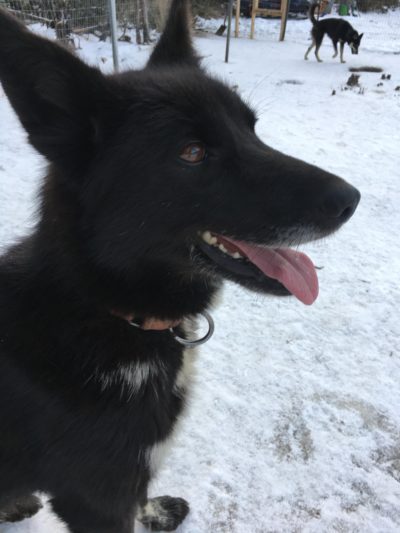 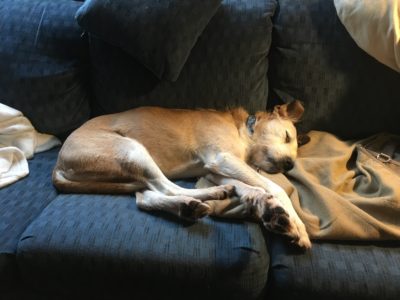 Sundance and Cassidy are puppies from Martin Buser’s Happy Trails Kennel (related to the Star Wars puppies). They are ridiculously cute and cuddly, and sassy. They are just around 10 weeks old now.

Furiosa and Mad Max are from a litter of puppies bred between two of my good friends’ kennels, Dark Horse Sled Dogs and Ryno Kennel. It’s a really cool breeding and I’m super excited to see how these guys do. They are about 9 weeks old and are now adopted siblings of Sundance and Cassidy– all four pups live, eat, and play together. I also want this to help enforce that sense of pack and family. The age difference between the Star Wars pups and these guys is a little much for them to play nicely together (the Star Wars pups are a bit overwhelming for the newbies), but later on, when the babies catch up, they’ll all freeplay together, and all of this years’ pups will learn to pull sleds together this spring.

Finally, my newest addition to the kennel, and my sixth adult dog, is Egret. Egret is 3, like Annie, and comes to us from Smokin’ Ace Kennels, who won the Yukon Quest last year. She’s a shy girl but she’s already fitting in. She has a very similar personality to Annie, and gets along with Nala really well. She had no problem fitting in with the other “Amazons”, and is already impressing me on our training runs.

Oh, and I can’t forget Jessie. One weekend when I drove down to Anchorage, I came back and there was a fat old dog in the house! (Just to be clear, Shawn adopted him.) Luckily he’s the cutest fat old dog there ever was. He’s deaf as can be, very food-and-nap oriented, and follows Shawn around all over the house. Shawn, who has a huge heart, believes in adopting old animals, even though you have to say goodbye a lot sooner than you’d like. Jessie seems to really enjoy the atmosphere of being around a bunch of female dogs.

So now, like Sweeny Todd (but less murderous), I feel complete, finally. We have 15 buddies here at ATAO, and I’m madly in love with all of them. Here are some shots from around the kennel. I spent a couple days trying to achieve glamour shots for everyone, plus just getting to do some free play in our big pen, and going on puppy walks. 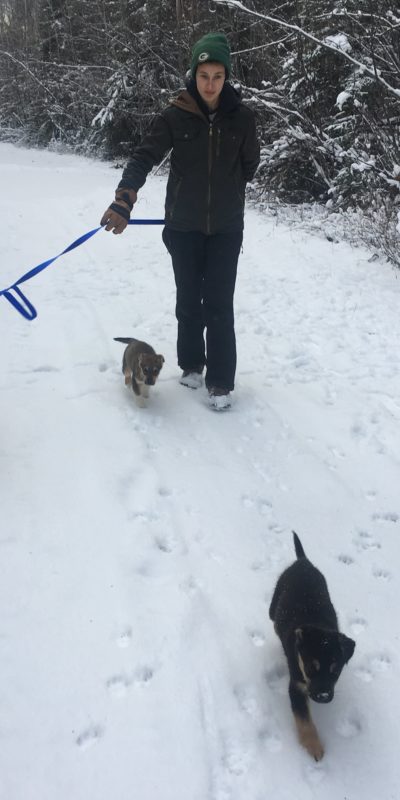 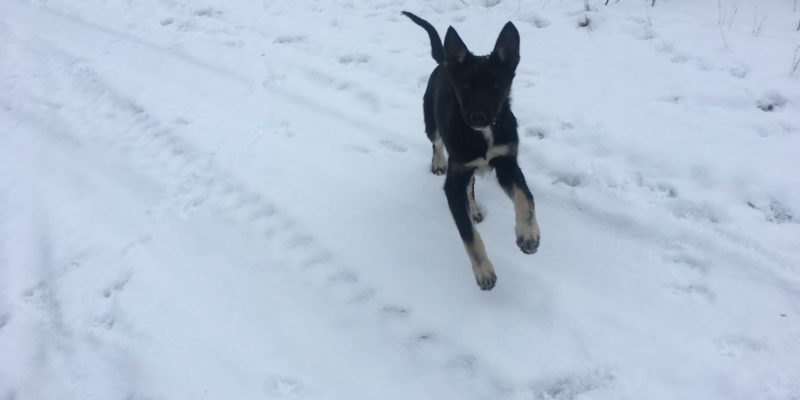 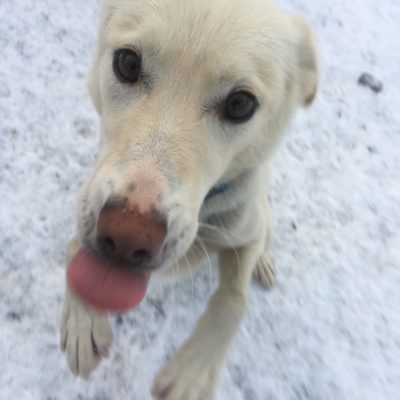 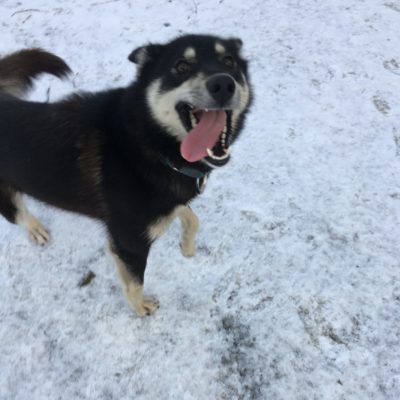 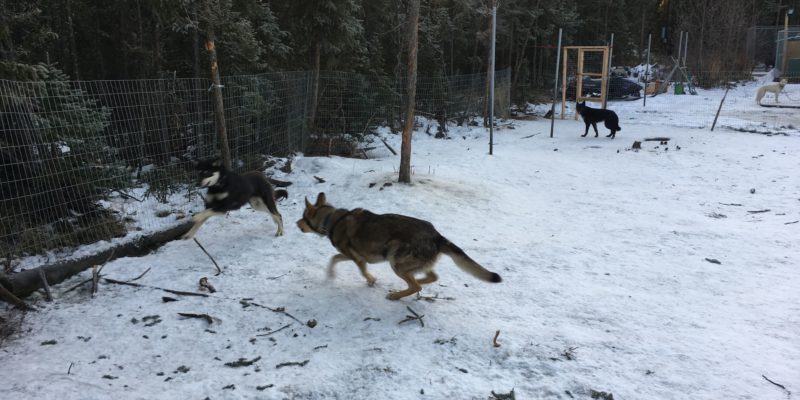