Maybe miracle is too strong– but for those little moments of success that seemed far off or impossible, even… miracle is the closest to what it feels like.

Two things happened yesterday that were important. One, I ran Emmy in lead for the first time.

She was driven and dedicated and strong. She was full of joy– like seeing an olympic athlete who has been cooped up get to jump in the pool for the first time in years. The front was where she belongs. All of her anxiety and nervousness and worry sluffed away. She held her head up and sniffed the wind ahead and she ran. It was beautiful.

The second thing that happened was that when we got back to the kennel for the night, she opened a little door to me. For the first time since she’s come to ATAO, Emmy not only let me pet her– she asked me to. I don’t know if it was the pure happiness of running in lead, or a new break through with all the slow and gentle work we’ve done, or the settling suspicion that this is home. Whatever it was, she sidled up to me when I brought her to her house, and she asked me to scratch her butt.

Ohhhhh she liked that butt scratch. So THAT’S your secret, I thought. I mean, who doesn’t like a good butt scratch? She did the classic butt-scratch dog-dance, the purest and funniest of all dances. Then she turned and she faced me– a first– and came close and let me pet her shoulders, and even her head.

Emmy’s fur is extraordinarily soft. I’ve never felt sled dog fur so soft as it is on the top of her head. I had waited to pet her here until she was comfortable, so I hadn’t known. I scratched her ears and massaged her face which was a little wet from the run, and gently ran my hand over the crown of her head. I moved nice and slow, and didn’t crowd her too much, and didn’t press her too much.

Her leadership was a gift, and her asking for this pet was a gift. It was the best gift.

Also yesterday, in a fitting turn, Emmy got her sponsor! Joey is now Emmy’s sponsor– We’re so happy to have you, Joey!

A friend has told me, “Every step is a step.” I think of this when I’m impatient or when it feels like I’m getting no where with the dogs, with training, with the ten million projects. This little sign of progress, of the work starting to pay off, was so needed and heartening. To see Emmy get to feel a bit more comfortable here– that’s priceless.

Every step is a step. And we have a lot of steps to go. But we’re making progress. 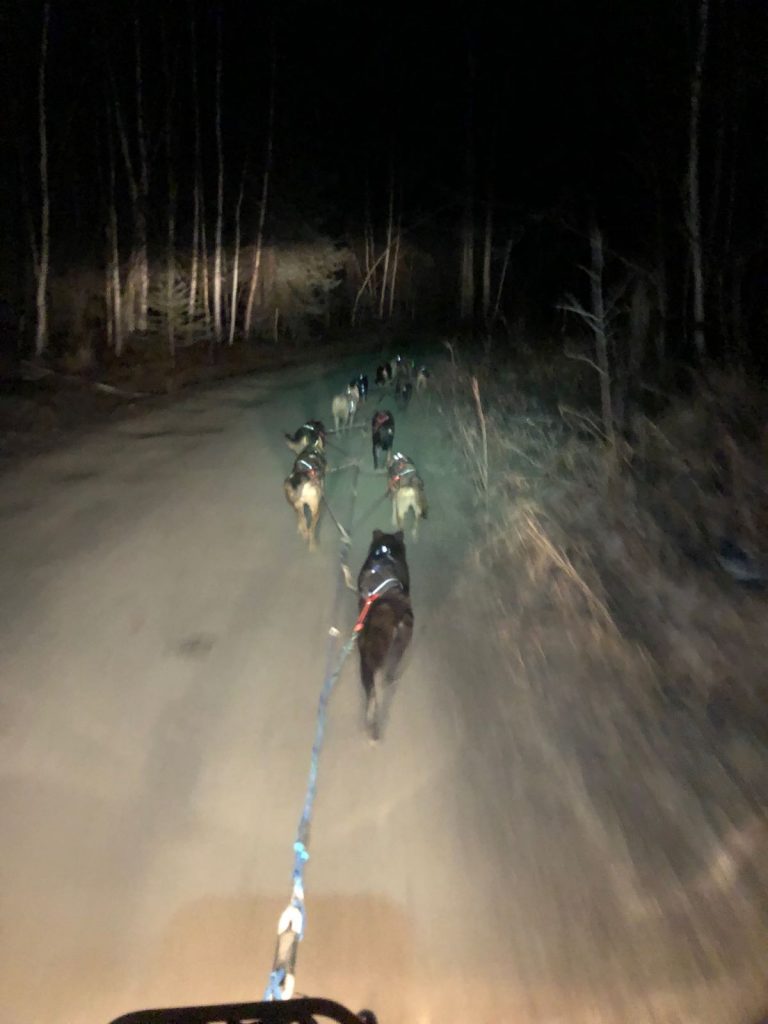