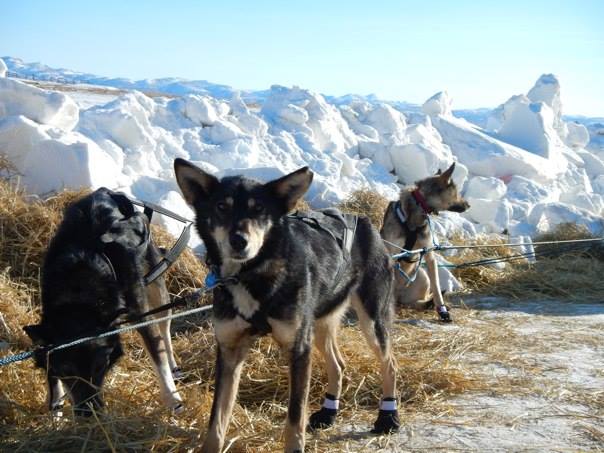 On Sunday, I took a break from “reality” and headed to Red Dog Racing. We had decided it would be a good time to do our first camping run with the team. Early in the season, “camp outs” are short and sweet. The point is to get the dogs used to the routine of resting. After running a lot myself over the last two summers, I’ve also come to appreciate the value of being able to jump up in miles by running, taking a break for a while, and hitting the trail again. It’s pretty incredible what the human or (especially) canine body can do with a little rest. On distance races, rest is crucial. You’ll see experienced dog teams lay down immediately once they see straw on the ground. A common rule of thumb in long races is to give “equal rest for equal run time.” So if you run six hours, you rest six hours. There’s a wide spectrum of practices on either side of that equation, but the basic tenant is sound and fairly true to life. In the theoretical six hours of rest, though, a dog needs to maximize the actual sleeping time. Young dogs are kind of morons about it.

This held true with my largely veteran group. Almost every dog on the team I’m working with now has run Iditarod and/or Quest. When I pulled the straw out for our short break, most of the dogs were excited to see it– “I know what this means!” they seemed to say. As soon as I laid it out (with some clumsiness, which reminded me it’s been about 3 years since I’ve done this routine… Last season I never did a camp out with the dogs I trained, and before that my last times would have been races at Lara-Ke Kennel), the dogs hit the hay. All except Aniak and Kobuk. These are siblings, both three. They are two of my favorite dogs in the bunch (it’s hard to pick favorites though, I currently have 17 favorites out of 17 racing dogs… Hmm…). They are both super eager and super friendly. And, they both LOVE TO RUN. So doing a stop in the middle of the run is a little foreign to them!

Aniak ran some mid-distance races last year and I believe part of Iditarod (I’ll have to double check!). Kobuk, unfortunately, ended up not getting to race last season due to a chronic injury. That seems to be in better check this year, so I’m hoping he’ll be in the lineup this year.

You could tell these two dogs don’t have the thousands of miles of race experience the others do. While everyone else curled up and got started on napping in earnest, Kobuk and Aniak were up and barking. They jumped around, trying to figure out why no one else was ready to go.

In a sled dog team, the basic set up is to have a neckline attached to the collar, and a tug line which attaches to the back of the harness, and is where the dog pulls from. When it’s time for a break, the musher ties out the front of the team so that there is a tight line between the sled (or four wheeler in this case) and the front of the team. Basically, the dogs are now on a kind of picket line. The musher goes down the line and unhooks the tug lines. Now the dogs are just attached at the collar, and are free to make their beds, take care of personal business, or do whatever else they need to do– and especially not pull! When the dogs are arranged with tug lines attached, they WILL start pulling!

Kobuk especially was turning circles trying to figure out why he couldn’t pull any more… And also, why everyone else was having a lay-down! He and Aniak took turns barking at their older compatriots, who looked at them with something between distain and fond tolerance, and continued to work hard at their naps.

A benefit of a veteran team (one of many) is that they are great teachers. Soon enough Aniak and Kobuk got the memo that it was sleeping time, and curled up in their straw piles.

When you are camping with a sled, you can take a nap yourself by laying on the sled. A four wheeler is not so cozy. And, with short breaks, sometimes sleep isn’t going to happen, especially on days like Sunday, where our campout was not necessarily at sleeping time (we parked at about 5:30 pm). Sometimes (often) I’ve brought a book along for these types of campouts. Once chores are done, might as well catch up on a few chapters. Of course, in the height of the season, when sleep is a rare beast, a short camping break will be well utilized by the musher. Some of my very favorite mushing advice ever, from Martin Buser, is “a good musher can sleep anywhere.”

The dogs got some good rest, and since I’d forgotten my book, I watched the night sky.

The clouds were hanging low on Sunday. In town (Anchorage and Wasilla and Palmer), it was snowing hard, but I didn’t know that. When I found that out, I wasn’t surprised, because the sky was threatening all day. Even as I camped, the ceiling was so close it reflected the headlamp light from teams traveling in the woods. I had turned my own light off. With new snow on the ground, I could see the dark resting forms of the dogs against the white, and it was comforting to see the close dark room that is Alaskan winter around me. Maybe some people would be scared of that kind of world, but to me it feels like home.

When the time came for hook up, the dogs were screaming to go. Despite this being a doubling of miles with only a short break between, they were fired up and ready to rock. They kept their speed steady and strong the whole second run. It’s a pleasure to drive this team: they are experienced, and strong, and steady. They are a big hearted team and a kind hearted team, and they are a strong hearted team. I can’t tell you how much I like them.

Soon, there will be more of this. More of quiet nights (mostly quiet, when Kobuk settles down!) under the changing Alaskan sky. This is why I do what I do. This is the whole reason.