Gerald is my tooth.

Sadly, I had just recently named him, right before he was rudely broken up and removed from my jaw the other day.

Gerald and I have had a long journey of too much sugar, crunching on things, eventual decay, a root canal, and now, finally, breaking in half and needing to be pulled. I’ll let you decide which of us did which things.

Gerald was one of my larger molars, and despite all of the carnage he suffered, he was well rooted in my mouth, and it was quite a process to remove him. There was a lot of scraping, pounding, cracking, and breaking to tear him out of my mouth. Let me tell you. It was a good time.

This all began by accident last week; on Wednesday I was driving into town to run some errands, when Gerald broke right in half in my mouth. I met Shawn for lunch, which turned out to be more of a sport than expected with my halved tooth. I didn’t quite understand the scope of the breakage until Shawn took a look and said, yes, that’s cracked right down the middle. Then I understood all the movement I felt on the outside of the tooth– The loose half was mobile. Still mostly attached. Yes, aren’t you glad you journeyed here to read this?

I went post-haste to the dentist, and they said it was time for Gerald to go. I’d previously had a root canal upon Gerald after the most painful three days of my life driving from Alaska to Minneapolis with an infected tooth– Now all of that was just going to be removed. I should have just had it taken out from the start! But, Gerald the root-canaled molar served me well in the interim.

On Friday, I got to go back to town *again* and the breaking, cracking, pounding, etc ensued, until Gerald was piece-meal pulled from my jaw.

When I left the dentist, they said: no lifting heavy things or bending over. I said: haha. Now I am just waiting for the dry socket to set in.

However, the pain and woe of tooth problems are alleviated by some fun things. We went to the start of the Yukon Quest and rooted on our Two Rivers neighbors, and my good buddy Riley Dyche, who is running his first Quest. It was strange to be on the “spectator” side of things, but Shawn really enjoyed seeing a big dog race for the first time.

I went home after the start and took my little team– The Core Four + the Demons (AKA Star Wars pups)– for a quick run before the racers got out to Two Rivers. We live right on the Quest trails. I didn’t want to interrupt front-of-the-pack racers’ runs with my little puppy team! But we had a great little run. It’s so cool to see the Demons developing. They are turning into real pros! I have to remind myself not to push them too far. The maximum I’m running them is 4.5 miles, and we take a lot of breaks. It gives me a chance to continue working on leader training for The Core Four, so it’s beneficial all around. Plus, it’s been beautiful with the sunshine finally returning!

The baby puppies can no longer really be called babies at all! They are almost as big as the Demons. We have a big walk or puppy playtime every day. It’s hilarious to see them develop their own personalities. They are really different than the Star Wars pups, who are a bit aloof– These younger ones are nutty, uncoordinated, un-self-conscious, and goofballs. Furiosa might have the most personality of anyone in the yard… And also the loudest, most off-key howl. 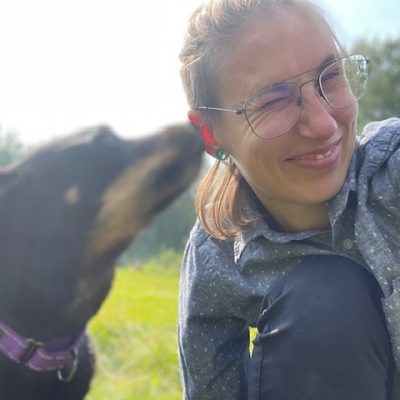