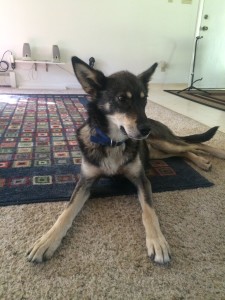 Hooch has been living inside with me this summer and, I think, soaking up all the love, attention, and dog beds. She isn’t one hundred percent sure about this life. Stairs were a terrifying learning process. My partner, Roman, is still for some reason super scary to her, as is the cat, Draco, and the new puppy, Orion. Actually, Hooch seems scared by a lot of things that aren’t me or running. I suppose it’s a whole new world. For a dog who has spent her time on the trail or at her wooden dog house, this interior life of free range walking, beach vacations, and marmots in the mountains is kind of a trip. I often imagine she feels like she’s hallucinating. Not all of these visions come pleasantly. She knows cars– the dog box!– and running. Because she is an all-star athlete who would need movement through the summer, I bought an omni-jour system, and she and I started running together.

When you have a Quest and Iditarod finishing sled dog on the end of the leash, you tend to move quickly over long distances. Much more quickly than I ever had. I’m short and stocky and in high school cross-country, they called me Godzilla because of my less-than-graceful running style. I didn’t have the luxury of tromping over imaginary cities with Hooch in the lead, this summer. I had to run, I had to fly. 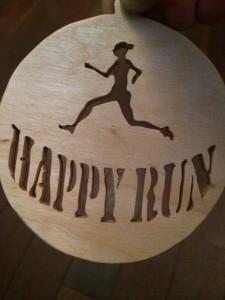 Every Monday in Palmer, the shoe store Active Soles puts up a fun run called “The Happy Run.” It’s two-four miles and ends each week at the Palmer Ale House, where you get a finishers ticket and a raffle ensues. It’s awesome, brings people together in the weekly hope of winning a free pizza. Sometimes they draw over 200 runners. There are two courses each week, the short and the long. Hooch and I started running the long (four mile) course each week, and in a bizarre twist of fate, we were running at the front. As an all-star end of the packer, where foot races are concerned, this was a whole new experience for me. For Hooch, it was like joining the hunt. It was her zen place. It was where she was meant to be. 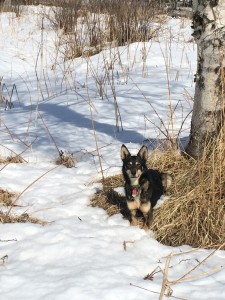 The first Happy Run that Hooch attended was after I had gotten her back from Scott after this year’s Iditarod. Mostly because of a situation where all the females were in heat, Hooch ended up being one of Scott’s main leaders, running every leg except one or two, if I remember correctly. The day I got her back, Hooch, Roman, Roman’s dog Indy, and I went for a walk in the woods. I let Hooch off leash tentatively, not sure if she would bolt or stick around, but she stayed incredibly close while Indy tore through the woods looking for new smells. We came to a field that looked out over the valley floor (we were tooling around the base of Government Peak, by our house). It was a mild winter day, the kind where you can smell spring coming soon. Roman and Indy wandered ahead, Hooch and I explored the big field, and eventually, Hooch found a comfortable patch of grass sticking up by a tree. I think this must have looked like a checkpoint to her. She roughed the “straw” up a little, turned two circles, and laid down. “Where’s my fish?”

During work, I kept Hooch in the car. It was cool enough outside that this wasn’t problematic, and at lunch time, she and I would high-tail it to the Matanuska river, where we could walk along the gravel banks for several miles upstream. Most people headed downriver from the bridge where we parked, but we discovered that if you followed a tricky up-and-down path through the woods, you could come out on the upstream side with no one to bother you. I didn’t know how Hooch would be with other dogs, or if she’d run into the road given the ability, so I liked this isolated side of the river. She’d have a real trek to get to the road, and most people didn’t like the climb down onto the river that we had. We had the world to ourselves over there.

I started running with her at home, before the Happy Run– I must have. I can’t imagine that being the first run we did together. She was an excellent running-mate. She pulled, but not too hard, like my crazy Chesapeake Bay Retriever, Coby, who pulls so hard I have pulled muscles trying to run him. When I started running Hooch, I had a leash I’d bought at REI that clipped around my waist and involved a bungee between me and her. I was planning to get an omni-jour setup, basically a more reinforced running belt, one you could use ski-jouring as well as running, but for now this simple leash would do. (In the end, the omni-jour belt made me feel like Tron, and the simple leash became my go-to. I’d rather wear less if less is possible.) I am sure we did our first Happy Run with that simple leash.

At home, our runs were not as intense as I had expected. She gauged my speed and kept time with me. She pulled, certainly, but not to the point of majorly faster mileage. It was good, I thought.

Then the first Happy Run.

As soon as Hooch saw people ahead of her, the game was utterly different. I had my phone set to tell me my pace every two minutes, at that time, and after a takeoff that had us bounding past strollers, cutting across lawns, and hunting down the pack leaders, I was half shocked and half not to hear that our pace was in the six-minute-mile bracket. I had never in my life run a six minute mile. My top mile that I had recorded up to then was somewhere in the eight minute range. I was super proud of a 9:45 pace at my first half-marathon. Suddenly I was flying along doing something I thought wasn’t physically possible in my body. It occurred to me that we were only going about 10 mph, and that Hooch could easily break 15 or 20 mph. At that point, I’m sure my body could not actually keep up, and I’d be dragging. Hooch was astute enough not to let it come to that.

Obviously, I had a dog– not just any dog, a world-class athlete– pulling me along. But I wasn’t on wheels, or even runners. I was on my own legs, and I was… Not falling and dragging on my feet. And, I was breathing. Breathing had been a big barrier for me in my speed, on my own. It would get so bad and ragged that I scared runners I came up on from behind. It also ended up giving me major side-stitches and created a speed ceiling for me. But, with Hooch setting our pace at this breakneck speed, I was breathing fine. In fact, I was almost breathing normally. There was a point where I could have slipped into my rough breathing pattern, but I think at that moment I let go a little, let Hooch take the lead, and in that, my breathing eased, and I was just along for the ride.

We ended that run somewhere near the front, with several other front runners teasing me and asking if this was cheating (to which I replied, “Absolutely!), but the Happy Run isn’t a race, it’s a fun run, and it was nothing, that day, if not fun. I started running with Hooch almost daily, although our best speeds were always at Happy Runs, where she had someone to chase.

All of that is well and good, and she and I ran paces everywhere from that six minute mile to more sedate nine minute miles. It was good exercise for us both. In the middle of the summer, one week, the spirit moved us, and we did a 14 mile run up into Hatcher Pass. It was a run Roman did fairly often but which I’d never done, and I wanted to know if I could. Dog pulling me or not, it was a feat, and I was proud of myself when we were done. Two days later, Roman asked if we wanted to do the same run again, with her. We did. The year before I had never imagined I could even run a 5k, much less a 14 miler, much less twice in a week.

And yet, there was a dog pulling me. A good one, at that. 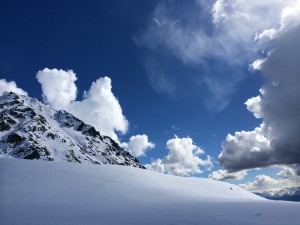 But here’s the thing: Hooch gave me something I don’t know if I could have found anywhere else. She gave me the massive revelation (or delusion?) that I could run six minute miles. That I could run 14 miles in a go. The delusion part is me not giving her enough credit… But I think sometimes it takes a little confident delusion to get things done. I did run a six minute mile on my own this summer. I did run big miles this summer without Hooch. And most of all, I kept a steady sub-nine-minute-mile pace very consistently all summer. Sometimes I hit easy seven minute miles on longer runs. All together, I moved much, much faster than I ever imagined I could. I think Hooch is probably saying, “Wow, I never knew I could run so slow. But I did finally manage it, and I think I learned a little too.” No, wait. Right now, she’s passed out on her blanket, her paws around a dog bone. Her feet are twitching. I think she’s dreaming of running faster, on the snow. 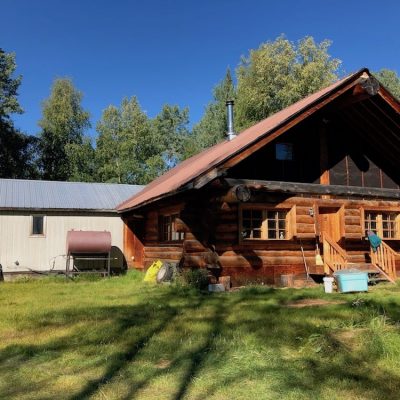 Over the last few weeks, our lives have been dictated by the idea of movement....

Don’t drink water from the ocean. I know you already knew this but I’m advising... 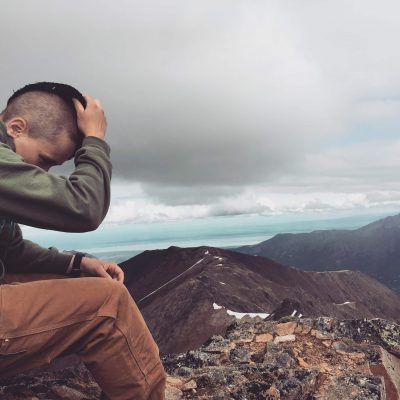 In the last two years, I’ve gone through a lot of emotional, existential alchemy, pushing... 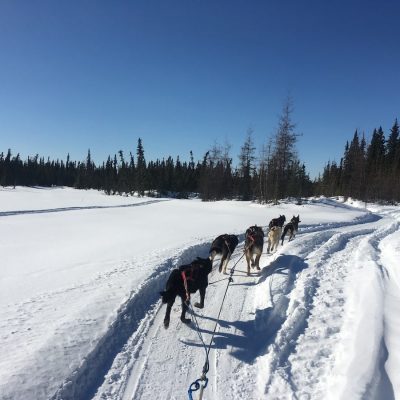 We’re already hatching plans for next year… I can’t wait! Our first year of raising... 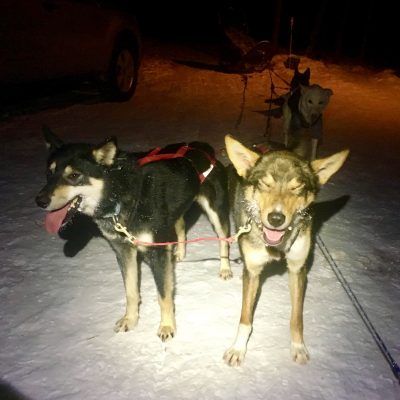 Bonalon and Hooch are enjoying the couch life. They both told me, in no uncertain... 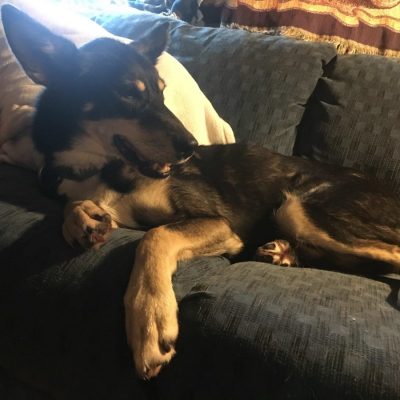 This November was tough on my mental health, and it’s also forced me to look... 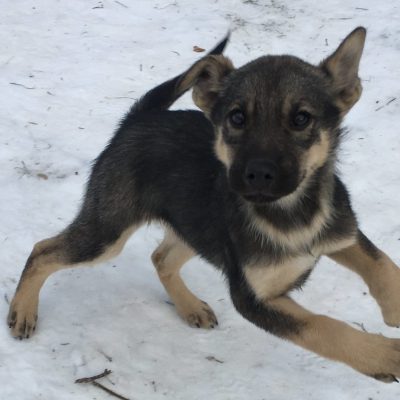 It’s hard to believe… But the team at ATAO Kennel is complete! (For this winter...