Well… Things have been so crazy since I started this hitch, I haven’t had the chance to write any of it down. I’ve been thinking blog posts a lot. This happens when I mush– I have a lot of time to think. But so far, it ESP hasn’t been a successful means of dictation.

I don’t even remember how this hitch started. I’m going to have to think back… it wasn’t that long ago!

I started the hitch with a photo session with my co-worker Ashley Fandrich, who came out to the kennel to do portraits of the dogs. She and her mother run MADesign Photography. I’m using those photos to put together our upcoming Red Dog Racing gallery and dog sponsorship program. More on that soon!

This was right after some snow/rain, and the roads had already been pretty bad. But, SNOW! That was a good thing.

On my “off” shift, I came out to the kennel a couple days to help run dogs. We did our first camping run of the season, two Sundays ago. It was good to be camping. I think the best part was the silence. Running on four wheelers is a noisy, belchsome endeavor. The moment you switch to sleds is wonderful most of all because it’s so quiet. It’s the same thing taking a camp out. You turn the blasted machine off, and then it’s you and the dogs in the world.

In Willow on the quad trails, you’re always fairly close to the highway, so quiet is a relative thing. The clouds hung low, and the sound of passing cars bounced off the ceiling. But, I already wrote about all of this. So– Right when I was leaving, it began to snow. Or was that Wednesday? I don’t remember– it’s blending together. This is why I should blog every day, so I don’t forget. But, at some point, right before I drove home from the kennel, it started to snow, and snowed gangbusters all the way home. And the next day. And the next.

Wednesday, before my official hitch began, I came out to the kennel and did a run with the team. Scott has been rushing to finish the foundation of his new house, so I offered to come do a run with the bigs. We’re not to 100 mile runs yet– I can accomplish a run after work yet.

So, Saturday after that, the official beginning of my hitch, I met with Ashley at the kennel mid day, and we did an hour of portraits of the dogs. The dogs were– Mostly well behaved! They were very excited to see what this strange person with a camera meant. She was able to grab some pretty great shots.

Saturday and Sunday I ran dogs, and Monday I headed to work in another blizzard. Sunday, the snow had started coming down in real earnest. I ran dogs in the evening that day, in the snow storm. I wanted to give them some cushion on their feet. We got it. We got a good 8-12 inches of cushion.

Scott left late for his work hitch– He went back Tuesday instead of Monday. This was a good because it meant that Monday night he plowed. Russ’s is a big property. Monday morning, thanks primarily to now owning a Subaru, I was able to escape the driveway, but since the snow was still coming down hard, I wasn’t sure how it would be getting back in. But when I got home from work, the drive was plowed. Scott had been hard at work. I fed dogs and moved houses. With heavy snowfall, the houses will end up getting burred if you don’t move them frequently. Moving houses reminded me of my summer on the glacier: we moved houses once a week, in that case because the snow was melting and the houses would sink. After that, I helped Scott finish plowing. I shoveled snow out from the edges of the house and garage so he could move them with the truck. I was grateful he was there for that part– I haven’t ever plowed before.

Wednesday I ran both the pups and big dogs, and on Thursday I did another camp with the bigs. I changed my camping location to a spot in the woods. It wasn’t long enough of a camp, or late enough, to try to sleep, although I might have done if there was something more comfortable than a four wheeler available. As it was, I sat in one of the foot rests and I turned my light off and looked up at the stars. It was late enough to be dark– but then it almost always is these days. The moon wasn’t up. It’s incredible how much light there is between stars and snow. In the Copper Basin, when we went over a mountain summit, it was a perfectly clear, starry night. There was no moon, but with my light off, I could see the entire mountainscape spreading out around me just by starlight. This was like that in a smaller, more intimate way. The sky was framed by frost-haloed trees. And in and among the stars- something moving. A satellite. I remember seeing them as a kid and thinking for sure THIS was a shooting star. In a little bit, sitting out on my camp with the dogs, I started to see more and more of them. I counted at least a dozen. I thought about how many people there are in the world, and that it’s difficult to find somewhere without the sign of humankind. Now, even the sky was littered. That made me sad. 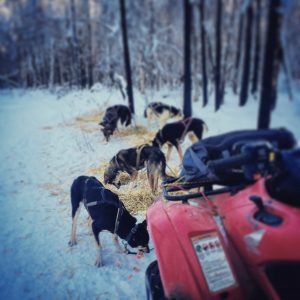 On Friday, I camped for the first time with the pups. We did a day run, and “camped” for 45 minutes in the same spot the bigs had camped– I was recycling their straw. I knew that the pups would not make good use of it. While the bigs team settled down pretty much right away (getting the drill), the pups spent the entire short break caterwauling. They twisted, turned, wailed, whined, and generally made a nuisance of themselves. They enjoyed their fish snack, but did not know what the straw was for. Soon enough, we were off again. After about four tenths of a mile, I put Dude, the only male of the pups, up front with veteran leader Cujo. Dude did amazingly well! He was forward oriented both in movement and at rest. He and Cujo kept great pace together with a perfect trot. I was very proud of him. Occasionally, Cujo would “consult” him. Consulting is what I call it when one of a pair of running dogs turns to the other and sticks his nose in the other dog’s ear or face. It’s a very gentle poke, like the consulting dog has decided now, whilst moving, is the appropriate time to smell his or her companion. Sometimes, the consulting dog will consult back, and two dogs will be running (in perfect time) and sniffing each others’ noses. Or whatever they are doing. Consulting. It’s a very friendly, almost affectionate, interaction. I was pleased to see Cujo seemed happy with his companion. I was too.

All of this is investment. The four yearlings will be an important part of my team next year. They will be the youth and enthusiasm experts– if Kobuk and Aniak have relinquished that mantle (I’m not sure they will have by then!).

It’s gotten cold now. This morning it was -17 an hour after first light. I was glad I’d put extra straw in the dog houses the night before. I swear that ten below in Soldotna or in Willow is a hundred times worse than 50 below in the interior. The “Interior” includes Fairbanks and the Copper Basin. When I trained in Two Rivers, we had a cold snap that lasted all of November and much of December, where it stayed and unrelenting 40 below and sometimes dropped to 50. A lot of people headed south in search of warmer temps, but we kept mushing where we were. The dogs and the mushers dressed up in layer upon layer of gear. It made us all tough! But I’d take that dry cold any day over the humid cold that is anywhere near the coastline of Alaska. Willow is surprisingly close to ocean. Close enough that there’s plenty of moisture in the air. (Or maybe it’s not about being close to the ocean? I’ve alway just assumed… Someone correct me if they know otherwise!) Compounding that, of all mushing activities, I firmly believe four wheeler training can be some of the coldest. The way you are positioned– higher in the wind, and often sitting– makes you more exposed and I swear does something to reduce blood flow to the legs. Despite wearing the vast majority of my winter gear (not a good sign… It’s always better to save some for later), it was a chilly ride today. I thought a lot about how I hate the cold and am therefore certifiably crazy, since I’m pursuing an activity that will only guarantee more coldness. That’s okay though– You know why? Because right now, I’m warm. I’m inside enjoying electricity and a combination of wood head and oil. I am very lucky to have these things. I can enjoy them, and absorb them, and bring them with me on the next run, tomorrow. 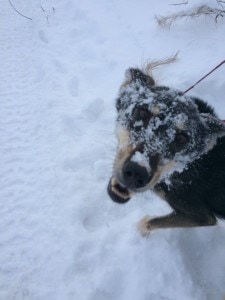