We have some important news about Mr. R2: he’s heading to a life of couchy goodness.

I thought I better get that out of the way first off, so no one thought the worst.

You probably know that R2 was one of our first ATAO puppies as part of the Star Wars litter. He wasn’t *supposed* to come home with us… But we fell in love with the little runt of the litter. His aloof and independent spirit was easy to see from the very start. While the rest of the puppies in the big litter of 9 rushed up to meet Shawn and I, R2 (not yet named!) 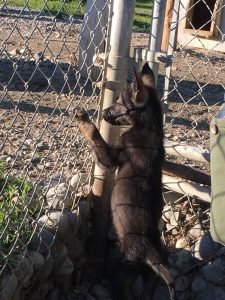 stood to the side and looked out towards the horizon. He let us hold him and tolerated our petting, but it was clear he was really focused on going further and exploring more. He was also purely adorable.

When he came home with us and we did our first free play with the group of four, R2 took advantage of that freedom and struck out on his tiny own. He checked out the edge of the unknown woods with fearless curiosity. Luckily he also likes food, so he deigned to return after sufficient exploration. 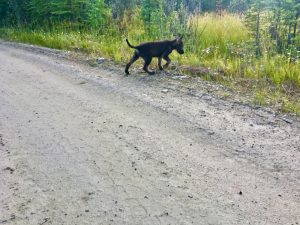 As the pups grew and we went on more walks and journeys, R2’s exploratory nature grew too. While other pups gathered around with joint excitement over a stick or a toy or food, R2 would invariably be off in the woods, exploring or looking off to see what to explore next. During our big puppy walks to the pond or down the end of the rural road we live on, R2 was often the last to be encouraged back to the dog truck to go home.

Mushing was a revelation for the intrepid adventurer. Here he could channel all of his restless energy into a single forward drive… OR, upon occasion (like, every occasion) chewing! He 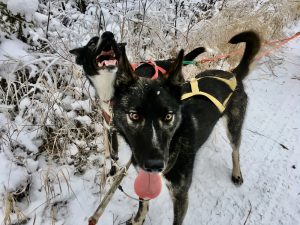 already had a deep love of dog toys and sticks, as long as he could have them to himself, but with mushing he not only had the ability to channel his energy into a specific task… But he had a wonderful long chewy rope to munch on! Unfortunately that is, of course, the rope that everyone is connected to. Luckily we never ran into a situation where he destroyed the whole gangline… But many a neckline have fallen to sharp-toothed R2.

R2 was a fantastic sled dog. He drove hard and never, ever wanted to stop. All of that desire to go forward was harnessed, literally, and bloomed into impressive pulling power. He was also a great leader, smart and intuitive.

We let the sled dogs tell us if they want to run. If a sled dog ever asks not to, they don’t! Why would we ever want to “make” a dog run? It’s antithetical to the whole idea of mushing.

But there is one case where we have to tell the dog to do something they don’t want– to NOT run. This was the case with R2, and it was a hard one.

In his first big race, the Copper Basin 300, R2 performed incredibly. He never stopped barking to go on stops, even through the toughest run of the race, a 68 mile leg that climbed 4000 ft and then meandered back down.

At the end of this truly tough leg, though, R2 fell ill. He was cared for by the race vets and immediately withdrawn from the race by me for his safety– and then cared for and pampered by the handlers the rest of the weekend. He recovered and generally seemed okay except for a minor limp. This limp didn’t dissipate even with massage, heat, and other husbandry on our part. When it was clear something deeper was going on, we took him to the vet to be X-Rayed. Something was up with his bones. Two different vets looked at the X-Rays, and they even sent them in to be examined by a radiologist. R2 either had a fracture, an infection in his bone, or a disease that could cause one or the other. We were able to treat him and get him back to being in tip-top shape– But by this point (and after long discussion with experienced race vets), I made the hard decision that it wasn’t worth it to me to push him (aka allow him to keep pushing!) to do distance mushing. 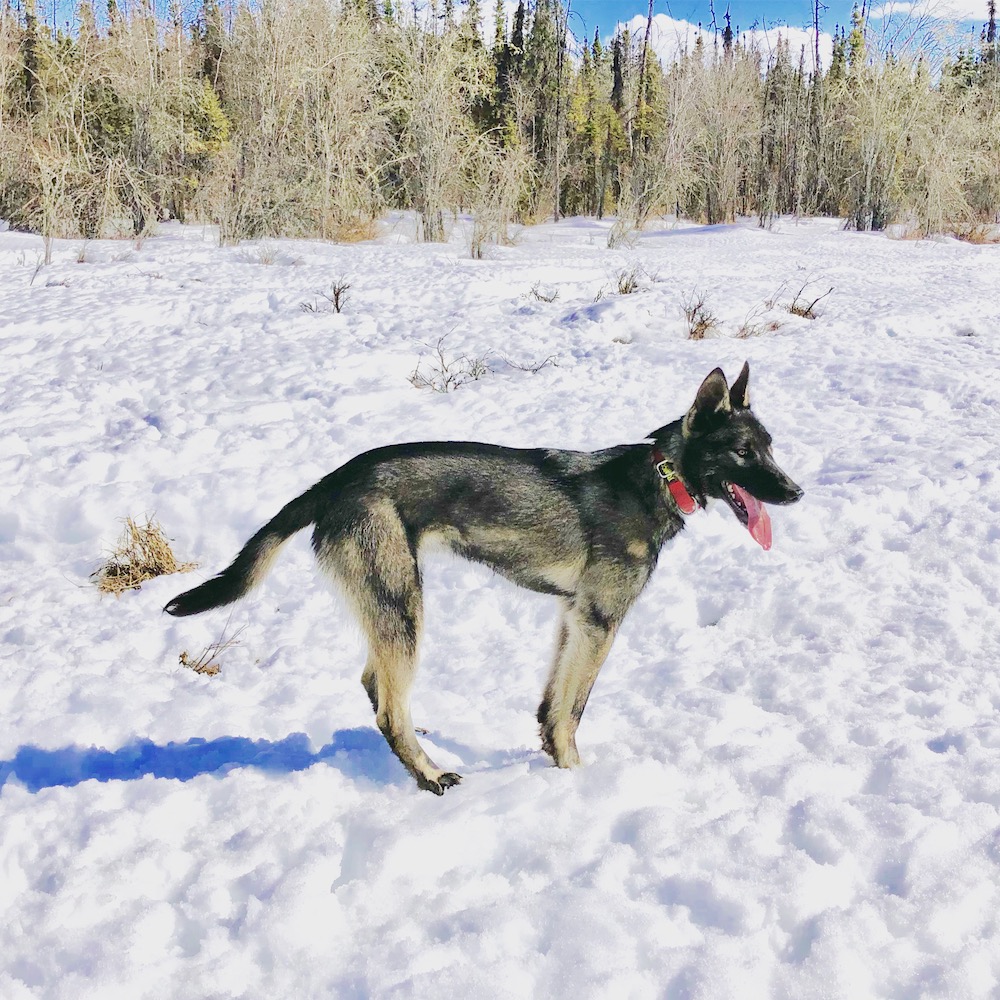 This was a really hard choice. When he was recovering, and we’d take off with the team without him, he’d wail and scream. The independent boy had found his place in a team. When the dogs all moved forward and explored together, he finally belonged with them.

This past year, R2 got to do short mushes with Shawn, with the puppies and at the early part of our training. But, it was never enough. As we moved to distance runs, R2 would watch us hook up. He didn’t bark or scream any more to go: he knew he would be staying behind. When we returned, he’d watch us from his house, and then tuck his head away. It broke my heart. 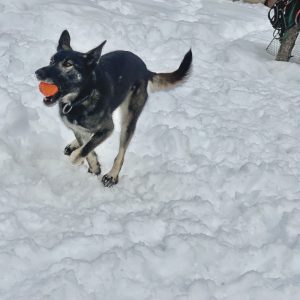 When we weren’t mushing, R2 free played a lot. He didn’t seem to feel the need to push the edges of exploring, any more. Now he would spend most of his time with whatever special dog toy he could locate or dig up. There were a few that were big hits with him. A friend of ATAO sent a big orange ball that had a tennis ball inside. He’d toss that ball up and down to himself, and bound on it like a fox. If we free played R2 with the rest of the team, he’d ignore them, for the most part, and play with his toy by himself. It was as if, if he couldn’t run with them– if he couldn’t be part of the team–, he didn’t want to hang out with them. 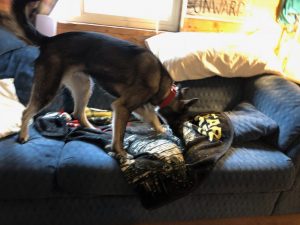 R2 came inside to hang out with us a lot and get a lot of love and attention. He enjoyed demolishing the Bark Box toys that Oli and Jesse would get from Shawn’s parents. He seemed content inside: he’d tuck himself into the corner of the couch with a toy, as though he belonged there.

When R2 just couldn’t go along on the big runs any more, I started thinking about finding a space for him where he’d get to be fully “on the team.” Where he’d have infinite dog toys, a couch to tuck into, and a lot of love.

Shawn’s parents have been excited about the Star Wars pups since they first came to ATAO. Maybe some of this is because Shawn’s dad, Tim, is kind of a Star Wars nerd himself. Either way, they’ve mentioned now and then welcoming R2 into their home. They have two dogs (siblings) who are getting to be older, and they are ready for a sweet friend. 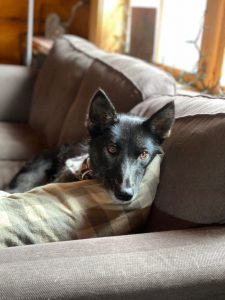 We talked over the summer about how this possibility might go. A few weeks ago, Shawn’s mom realized she had the opportunity to come up to Alaska (with the proper precautions of course). The idea of R2 going home to the Goggins clan in Wisconsin was chatted about more seriously. And, we made a plan.

This past week, Julie has been up at the kennel. She’s been a big help, cooking up a storm, doing dishes (THANK YOU, Julie!), and even scooping poop! And, she’s been bonding with R2. Even though she’s not sure if he has yet (he’s aloof!), I can see R2 oriented towards her. Forming a little bond. One that I know will grow with the whole family.

Yesterday, R2 left with Shawn and Julie to head south. They will do some camping and hiking together, and then they’ll head to the airport, and R2 will fly to his new home.

It was strange to say goodbye to my buddy. He was one of the first members of ATAO when we started up here. My brain can’t really compute him being gone. But, I also know in my bones that he’ll be loved so deeply in his new home– And most of all, he won’t be sitting out from being part of the team. He’ll get to run with Shawn’s brother Timmy, and play with a ton of dog toys, and check out all the couches he could want.

He’s got an exciting journey ahead of him: a new adventure to explore. I’m so happy for him– And I’m going to miss him so much.

“Bring me that horizon!”