Wow! What a crazy few weeks. It was hard to believe our friend Arthur was finally visiting– And good thing their #worstvacationever / #autumnassistance came when it did, because it get ATAO ready for the next phase… Some new faces and SNOW!!!!

Shortly after Arthur left, we had a nice dusting, but it didn’t stick around. But I think Fairbanks was just waiting for me to leave to do what it’s supposed to do… WINTER. (Yeah I verbed winter! Deal with it!)

Where did I go this weekend while blustery autumn became white and frozen (as it should be)?

I traveled to the Matanuska Valley (a 5+ hour drive) for work, but I also accomplished a list of some other cool things. And I couldn’t have done any of it without a ton of help.

The Darnell family has always been a huge support to me in mushing, from hosting me as their resident Jr. Musher through three years of high school, to letting me base camp there for my first Northern Lights 300, to providing the foundation of gear, harnesses, and hardware that make up ATAO. This weekend they were there for me again, in more ways than one. They let me and two lil’ nuggets crash with them over the weekend, and especially provided housing and cuddles for those same nuggets. I brought Rey and R2 down for the weekend, and they were provided the cushiest housing a puppy could ask for– a big pen, lots of straw, toys, and even, inadvertently, some carpet to chew on. Plus, they got to hang out and snuggle with Pam and Daryl. It was a great trip for R2 and Rey to get used to traveling, going potty in strange places, and… Visiting kids! More on that soon.

While I was down, I was able to pick up a snow machine (some of you lower-48ers would call it a “snow mobile”… I say, it doesn’t hang from my ceiling, okay???) donated with incredible generosity by Willanne Schoppmeyer and Aimaagvik Kennel. If you haven’t visited their Facebook page, you should give it a like! Willanne’s daughter Jessi is taking the plunge early, compiling her own team of dogs to qualify and race Iditarod. Even while Aimaagvik is starting itself, they have been supporters and cheerleaders for ATAO, and have donated a bunch of gear our way. The snow machine comes JUST on time! Thank you SO MUCH Willanne!

And, again, I owe Daryl Darnell a huge debt of thanks. He stopped by to actually pick the snow machine up from Willanne, which was a huge help to me, as I was working late that day in Anchorage. This saved me a ton of time, and wasn’t easy to do. I can’t express how much I appreciate the help. Daryl also helped me load the snow machine onto the trailer my parents are letting me borrow. Another important thanks I need to give! My dad is providing his trailer for ATAO use this winter, which will become our “dog truck.” And I have to say thanks to Shawn and Shawn’s parents Tim and Julie for the use of the Blazer, which tows the trailer. Altogether, this setup wouldn’t be possible at all without a lot of generosity from a lot of folks. I thank you all so very much.

Another thing we got to do while we were down in “The Valley” was to give some class presentations. I talked to classes at Finger Lake Elementary and Midnight Sun Family Learning Center, including some of our Founding Classrooms. The subject of our talk was achieving your dreams. I focused on how Attitude, Perseverance, Problem Solving, and Positive Self Re-Enforcement can help you overcome a lot of obstacles. Of course I had to tell the story of the day before my very first sled dog race, when I lost my boot while I was mushing! Here’s a clip:

Thank you to Mrs. Heinzman’s class, Mrs. Darnell’s class, Mrs. Tro’s class, and Mrs. MacDonald’s class for having me there to speak! The kids were all gracious and had great, thoughtful questions. Oh and everyone enjoyed meeting R2 and Rey! The “Star Wars” names were a hit! It was my very first round of talking to classes through ATAO and I’m excited to hopefully do more talks soon! You can become a Founding Classroom here.

I drove hard all afternoon to get home late last night. I have say thanks finally to Shawn for taking care of the rest of the kennel while I was gone– Even as roads became super slippery here in Fairbanks, meaning Shawn had to get up extra early to feed dogs. I knew the dogs were in good hands here.

Tonight, after a few days off, the dogs and I are excited to get on the trail. We only have few inches of snow (although more is falling as we speak…), but I’m still tempted, as I always am in the first snowfall, to switch the noisy, annoying four wheeler for the sled. It’s usually a bad idea with this little snow– particularly because it’s difficult to slow the dogs down (not enough of a “base” to brake on) and there’s no where to set your snowhook (again, not enough “base”). I’ll try to hold my horses, but with only 5 dogs running, the temptation is extra strong this year.

Finally, we have some new faces around the kennel! You may have read about Jessie, Shawn’s new pet friend. He’s made himself right at home. There are also some new small faces added to the mix– Sundance and Cassidy joined us last week, and this week we got another new little friend. You’ll hear about her soon, as well as a couple more new faces…  And then the kennel will be complete! We have a “dog limit” where we rent (which is fair, because it’s a small area!), and with the pups and adults we have, we’ll be at that limit. Plus, I have a philosophy about having a very small kennel. Some kennels (especially those who have handlers) can keep up to 50 dogs, some kennels even have more. They run “A-Teams” and “B-Teams” and “JV Teams”. My kennel will be the whole A Team. Next year, when my pups are grown, there will be 14 adults– the perfect number to prepare for mid distance races that will help qualify the kennel for Iditarod. Anyway, that’s all a tangent for another time!

For now I’ll say, thanks again to everyone who continues to support ATAO, and thanks especially to the folks who were a part of making this weekend a success.

And now that I’ve traveled to “The Valley” three weekends in a row, I’M OVER IT! I’m staying here! No more traveling for at least a little bit! Also, with the weather becoming what it’s meant to be, and my own little crew settling in… I can’t imagine wanting to be anywhere else. 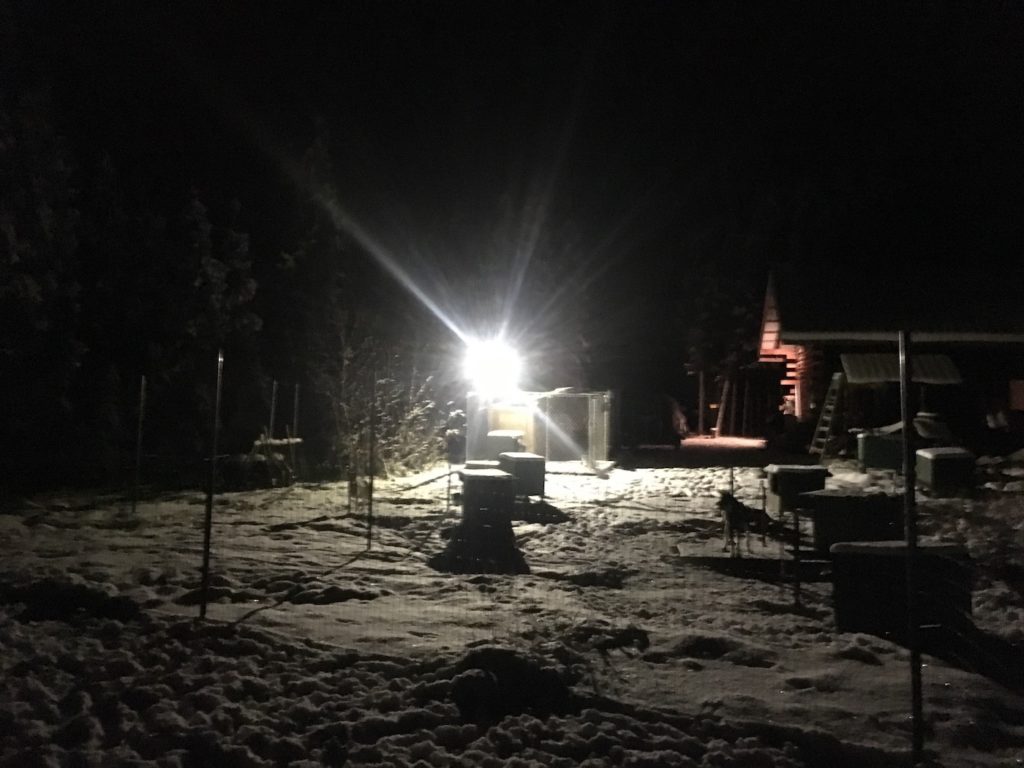