Last night I took half of the team out by sled.

We’re late into the season with virtually no snow pack. But the couple inches we got this past week were enough to tempt bored mushers. I saw runner tracks on the trail here and there, and a fellow musher said they’d taken six dogs out. “Bumpy but way more snow than the 2014 Iditarod” they said. (The 2014 Iditarod notoriously had NO snow. They mushed on dirt, no joke.) Well, half my team is six dogs. If I split the team and took one half on Thursday and the other on Friday, they’d all get their day off and… We could mush on SLEDS! It was perfect.

Shawn was a little nervous for me to leave so late. It took me a while to get the sled ready and trade out lines, etc etc., so I was basically finally ready to hook up around 8 pm. However, there’s a BIG difference between a quad and a sled. On a quad we were running about 5mph average. And it was bumming me and the dogs out big time. That speed (and the unwieldy weight of the machine) are great for early season training, but the ideal is that you switch out of it by October sometime. Now we’re halfway through November and still chugging along on this darn machine. The dogs were doing great but also, I think, wondering what we were doing this for.

I hooked up a carefully selected half of the team:

We tore out of the yard and onto the bumpy swamp. Having done this same route on repeat for the last week, I had a great idea of each obstacle or tougher area we’d run into. The first thing to overcome was the hummocked swamp we leave our yard from. It was a little bit like being inside of a popcorn maker. The dogs were flying, ecstatic to not be bogged down by mechanical weight. I was hanging on and trying to slow them down.

We made it off the swamp and onto the road. I knew here we’d have to travel somewhat carefully, as there was no way I could “set a hook” if I needed to. We use snow hooks– basically sharp anchors that dig into the snow– to hold the team when we stop. Without a base, there’s no holding a riled up team. The hardest thing to get a sled dog team to do is STOP. So we’d have to get over the gravel road portion without an issue. Luckily the dogs were in a rhythm and we made it to the trail without a hitch.

The run was magical. We didn’t stop for miles and miles– which is ideal. It’s good to let the team get into their rhythm. Excessive breaks can stymie that. That’s something I finally understood better while doing my own foot running and training.

We traveled to Jenny M hill. Up and over with ease born of dragging a wheeled machine uphill, in gear. The next obstacle was a little connecting trail that twisted and turned around trees. The trail may be somewhat new– stumps stick out of the ground there. I knew I’d have to be careful. It’s a downhill section, so it moves fast. The team zigged through the trees and my body, as it always seems to, remembered how to drive a sled like we had never stopped.

On and on into the night we mushed. It was an unremarkable mush– a perfect one. The team ran well. We stopped only a couple of times, for snow breaks and a fish snack once. The dogs flew. We averaged just under 8mph, and made the run in about three and a half hours.

We got home at midnight, or a little after– exactly when I’d been getting home when I started to hook up at 5pm other nights.

Riding the runners was like breathing a whole breath of air after your mouth has been covered for months. It was why we do this. I was cold and uncomfortable and tired out there, and I was in heaven. The dogs were like a unit together. Their pads hitting the ground in tiny, tapping unison. The half moon guided us, Mars hanging behind it like a looker-on. On the way home, Orion waited at the end of every snow-strewn tunnel of trees.

It was a beautiful and perfect run, and I can’t wait to get out there and do it again tonight. 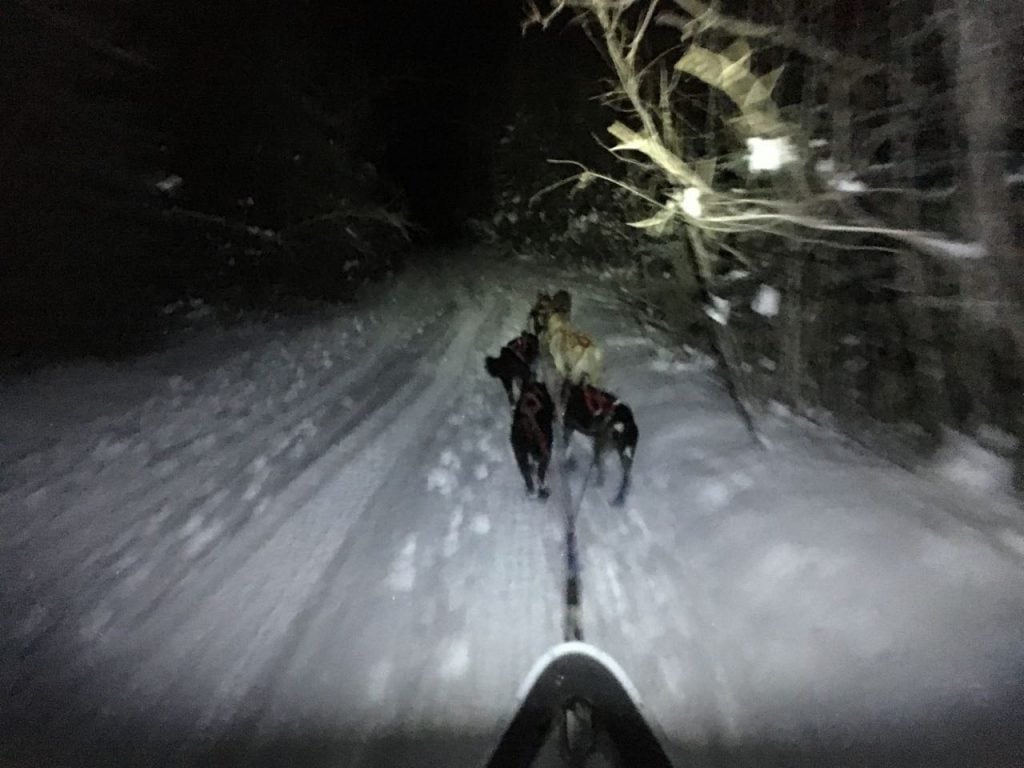