On Saturday, Hooch and I headed to Red Dog Racing for our first “hitch.” Because Scott works an oil job with two weeks on and two weeks off, I’ll be complimenting his schedule– so when he’s away at work, I’ll be at the kennel mushing. When he’s back on the range, I’ll have two weeks where I’m working full time at Out of a Jam. During the two weeks I’m mushing, I will be working two days a week in computer land as well, to keep things rolling at Out of a Jam. That’s slated to be Monday and Tuesday– so, today and tomorrow.

Saturday and Sunday Scott and I were both at Red Dog, to get things lined out and make sure we’ve got things on the same page. When I came over, Scott was working on his property. Scott’s an excellent carpenter. He’d been working on building a house on this property when I met him officially last fall, the first day Hooch came to live at Red Dog. The house was nearly completed when the Sockeye Wildfire ripped through Willow this summer. The house burned so hot that there was almost nothing left. I was in Homer when I heard about the fire, and I immediately texted Scott to make sure he and the dogs were okay. He told me they were, but the house was lost. I couldn’t believe it. He’d built the house entirely out of pocket. I asked him what he was going to do. “Start over,” he said. That’s Scott.

He was working on the foundation for House 2.0 when I arrived. I had put Hooch in the lot and unloaded some groceries I’d brought over. Until Scott gets his place up and running again, Red Dog is located at Russ Bybe’s place. Russ was lucky enough not to lose his house in the fire, although everything surrounding it is desiccated. He’s also a great friend of Scott’s, and a general good guy. 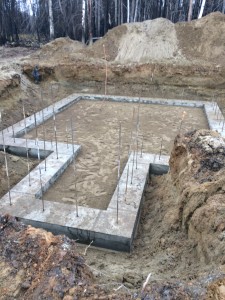 Scott asked if I was interested in helping out with the foundation. I helped shovel dirt for a while– we were leveling sand within the cement walls of the foundation. It reminded me a ton of working for Landscape Dimensions in Minnesota– preparing gardens in the springtime for planting. Maybe I have some kind of mole in my background– I perversely love shoveling dirt.

Next we headed back to Russ’s (where the dogs are) and hooked up a puppy team. We have four yearlings we’re working with this year. We hooked them up in single file, with Cujo and Pepperjack, veteran leaders, at the head of the team. Both of them kept looking back with a mild sense of disgust as the puppies tried to figure out what they were doing. One of my favorite things is starting puppies. There is a miracle that happens between the start and end of the run. At the beginning they look ridiculous, not sure which direction is forward. They spin and twist in their harnesses– imagine a puppy on its first walk, except multiple! But, the amazing thing is that once the run begins, once the elder dogs head in the forward direction, the puppies do too. It comes to them as naturally as swimming to a fish. It’s so amazing. When they come back, pups look like they’ve known about this all along. All right, some are better at it right away than others. But each of them gets it, and goes bonkers for it. They love it.

The past year or two I’ve been referring to mushing as “extreme dog walking.” Ultimately, that’s what it is. The amount of weight a single dog pulls generally isn’t massive– it’s probably often less than pulling a single person on a leash! (Don’t get me wrong, sled dogs are plenty strong and sometimes when weight is heavy or the trail is bad, the weight they are pulling is exponentially more.) After my summer running with Hooch, I’m convinced that mushing really is the biggest dog walk you can do. And what dog doesn’t love going for a walk? Or better yet… A run!

After the puppy run, we fixed up the yard. We removed and sorted old houses and installed new ones. Moving houses is always an exciting project. It’s a little easier in the winter, because you can slide the houses on their sides in the snow. It took a little bit, but the dogs were pretty happy to have some new clean, dry sleeping spots, with a fresh coat of paint! It’s autumn in Alaska, which means it’s mud season, so some of the dogs didn’t take long in “decorating.”

Saturday was a great beginning of the year. Now the real work begins! Tonight as my “hitch” really takes off, I’m leaving work and going right to the dog lot. I’ll hook up a team and we’ll do what we love best, extreme dog walking! Every run is one run closer to Iditarod.