Happy (Soon to be) Solstice from ATAO Kennel!

Once upon a 2017 December Mr. Billy Tro ran ATAO’s first Solstice race with the kennel’s OG team of 7! Well kind of.

Bonnie, Egret, Ophelia, Annie, Nala, and a friend’s pair of substitute sled dogs for Hooch who decided her shoulders were a little too old for a 50-mile race!

Teams in that race were, I think, 12 dog teams? But Billiam ran his heart out with a 7 dog team. I recall the comments being to the effect of “Wow you are flying up the hills, with so few dogs!” Willy [Editor’s note: PARDON? Surely “Willie” at BEST??? -WT][I have never been more offended in my life -WT] and his dogs are always flying up the hills because hill training is a favorite at ATAO.

Did you know (of course you know!) that our silly silly dogs bark, bark, bark all the way up hills with such enthusiasm?!

The joke is our team will never sneak up on another team because they are big excited talkers!

ATAO has since ran a team in the Solstice with Sarah Harman at the helm, and my personal favorite, a “tag team” race with Sam and Will splitting the Solstice 100 in half!

This year, it all changes! Goggdog is out for GLORY! The Groggins has been training for the first time, and bonding with the puppy team all season.

The local Mushing club is putting on a 20 mile Solstice race for the first time. It was originally open to junior mushers only. But that didn’t stop Shawnananana from reaching out to the mushing club and asking if they could run it. The mushing club said “Of course! But if you beat any children, you don’t get a prize!”.

That seemed fair enough, and we were off to train for a first race for Goggins. The 20-mile race has since been opened up to mushers of all ages. Naturally Shawn believes they are a trend setter! Also, last we checked only 3 mushers were signed up for this 20-mile race, and we are getting really excited for an outstanding shot at a top 10 finish!

Catch ATAO at the Two Rivers Dog Mushing Association’s Solstice 20 this December 17th! Which 6 – 8 dogs do you think will be on Goggins’ team of GLORY?! Stay tuned!

[If you would like to follow our race reporting via the Buddy email system, and you aren’t already a Buddy with some of the ATAO crew, you can sign up and choose your three favorite teammates over on the Everybuddy Page! It’s free for three, and if you want to support ATAO, you can also become a Patron and pick even more Buddies! Click the thing! Do the thing! Pick your Buddies! Link: ataokennel.com/everybuddy ]

Happy (soon to be) Solstice, may the days get longer, and your holidays be filled with quality care for yourself and those you love.

Shawn, Will, and the Dogs

Shawn is obsessed with all things lichen. They also like plants, puppies, and packers (the Green Bay variety). 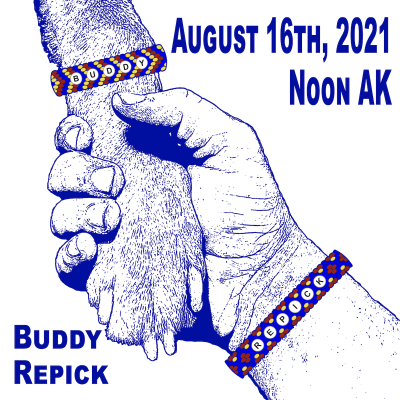