I foolishly called Apocalypse Design about a week ago with full intentions to order myself a set of custom bibs. Apocalypse Design is this pretty amazing company in Fairbanks that makes fantastic mushing gear. I’ve seen this in action, and used it myself. In 2011 I got to witness someone wearing a full Apocalypse suit go completely underwater twice, in -25 weather, come out, mush for another several hours, and when home was finally a thing, her long johns weren’t even wet. Now that’s impressive. I also wore Apocalypse bibs for my whole stint in Two Rivers, which was an extremely cold year where we had a really long stretch of -50 and -40. The bibs worked awesome. I am in love.

However, because they are incredibly popular, getting the custom bibs is something you need to do well in advance. Which I knew. Nonetheless, I naively called them up, and lo and behold, they are booked out for custom gear until January. That doesn’t work very well, as both of my races are in January, and I might also want to do some training before then.

On my last hitch, we had a brief stint of cold weather in Willow. I wasn’t 100% prepared for this. Considering that at the end of my previous hitch, there wasn’t snow on the ground… No, I have no excuse. Weather changes fast in Alaska. That is one really strange aspect of my “two weeks on, two weeks off.” Every time I return to the kennel the environment has come a long way (either positively or negatively… more on that later). So, I really shouldn’t have been surprised that things got snowy and cold. That’s a positive thing, by the way! But, I didn’t have the best gear for it. Especially in four-wheeler training mode. Somehow, training on quads is a million times colder than on a sled, even if the temperature is higher. In -20 it’s really cold. I had a lot of layers, but my legs were definitely chilly. Thus, I thought to myself, Will, it is time to order the bibs.

Well, no luck there.

That means that I’ll just have to wait till next year to order my Apocalypse bibs for Iditarod. But obviously it occurred to me that I better get something for my races this year. Previously I’ve mushed with people who either have children my size, or are themselves my size, and can lend me some gear for races. I have a lot of my own gear which I’ve accumulated over the years, but there are a few things I’m still short on. One, bibs. Two, mitts. Three, a rechargeable headlamp.

So, I started looking around on Craigslist and Alaska’s List. And lo and behold… Almost immediately I found EXACTLY the right set of Apocalypse bibs (AND a parka) for a mere $200, in the exact size and color I was after, right in Willow! I called the lady and left her a message that might have sounded frantic, I was so excited. Alas, when I finally got ahold of her, it turned out that she had sold the set right before I called.

Okay, two strikes. But, not to be deterred, I checked Craigslist one more time and this time found an ad 20 days old for a set of Northern Outfitters gear.

When I started mushing with Martin Buser, Northern Outfitters were the order of the day. Martin has always raced in Northern Outfitters and swears by them. I ran my very first race (the Jr. Iditarod) in them, and probably a lot of my other Jr. races as well. I also used some Northern Outfitter’s gear in my first Copper Basin 300. I haven’t necessarily pursued Northern Outfitters because it isn’t a layering system– you can (and in theory should) wear nothing or nearly nothing underneath. I like layering a lot. The other reason I haven’t pursued that gear is because I find it hard to move in, especially the upper layer. The design is based on a thick foam. I have always believed you have to be fairly muscley to get that gear to work for you as you go through chores at checkpoints, hook up dogs, and do the moving part of mushing.

However, this deal included not just bibs, but the upper layer and shell, a wind suit (which is totally priceless, those wind suits do what they’re designed to do), a set of boot liners, and mitts. This meant that for a ridiculously low price, I’d check bibs AND mitts off my list. Sure, they aren’t exactly what I’d have gone after, but they will definitely work. I know, I’ve raced in all of it before. So, of course I snatched it up.

The other small caveat to this is that the man selling the gear was a little bigger than me (really, just a little), and N.O. gear already runs large on my frame. Again, not the end of the world. Finally, the gear is super bright red. I would not necessarily walk across the street for red gear but… Hey, at least I’ll stand out!

I’ve never looked especially dignified in mushing gear. I’m way too short for an epic-looking big picture. But, I did my best.

Here, for your enjoyment, my new gear. Our poor pup, Orion, was terrified. I hope you aren’t, too. 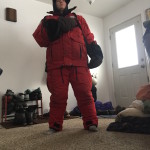 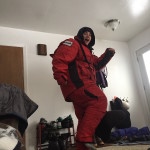 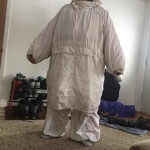 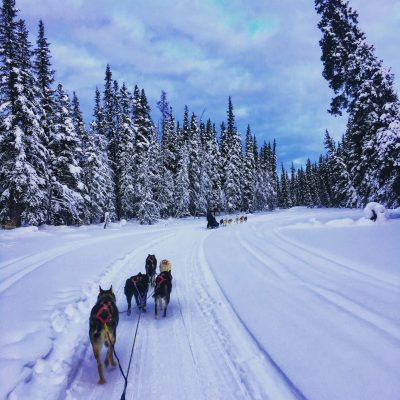 Looking back through pictures, I am flabbergasted to find that the winter has carried forward... 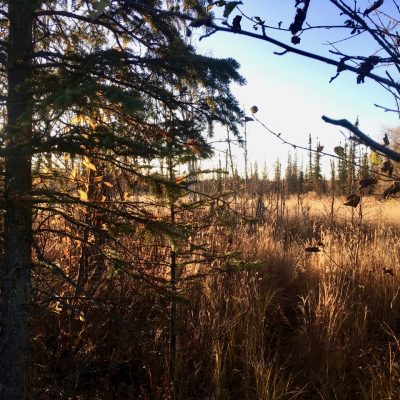 We let the dogs out of the truck one by one. They came out of...