We let the dogs out of the truck one by one. They came out of their boxes with energy and grace. In my memory, I see it slow motion, all perfect lines of legs and elongated spines and stretched taut tails; faces in rictuous of ecstacy, tongues lolling foolishly free. But in reality, I know each release was fast and chaotic. The dogs frenetic bullets released to their freedom.

We stood in a yellow field, surrounded by a wall of dry black spruce and birch and poplar whose leaves were oranging up with fall. An airstrip, where we could safely let twenty dogs– even long-legged, fast-running dogs like these Alaskan huskies– run as loose and wild as they pleased.

It was called freeplay. When I’d signed on to learn to mush with Martin, I had a lot of assumptions; I assumed the first thing we’d do, when I started in August, was hook up a team of dogs and go. Instead, we loaded twenty at a time into the dog truck and ended up here. This was a way to see dogs I’d never experienced. So many and so– let go. They were just them, viscus pack, running full out from one end of the field to the other. Organizing and re-organizing themselves. Challenging each other. My memory is overlaid now with the years and years of dog language I’ve learned. When I stood in that field the first time, I’m sure I was shocked and overwhelmed and overjoyed. Seeing a dog team run in concert is a specific thrill, one you can feel like electricity when you stand on the runners. You are connected to that elation, to that unequivocal forward motion. I’d gotten to feel that the prior spring, the very first time I’d mushed. Now I stood in and amongst a very different energy. A pinball energy, a ricocheting energy. The dogs were everywhere. They jumped up to greet us and to get treats. They sprinted and gathered the closest dogs to them in pursuit. They circled the truck and lapped up water from the buckets we’d brought. We pulled the four wheeler out and revved it up, and they chased us. Their tongues wagged out of their mouths in the bright autumn sun. They were just– Happy dogs.

We worked on things in the field. There was a dog, Elias, who was shy from birth. Some dogs just are. He wasn’t sure about coming around when it was time to pack up and go home. Martin worked carefully, methodically. He crouched on one knee and held a treat and called him gently. Elias crept closer, and soon close enough to be slowly enfolded and then put up in his box for the ride home. The next time we went out with Elias, Martin tied a very long string to his collar. He told me to step on the end of the string any time I wanted to call Elias to me, and then to gently reel him in and when he got to me, to give him treats and pets and love. This is how I learned to work with dogs. I loved Elias; I loved his shyness. At the kennel, I’d sit in his circle and wait, and wait for him. He was tentative, so watchful. So unsure. But when I waited and waited, and asked him for nothing, he came to me eventually. Curiosity overwhelming the shyness. A little sniff, a little nose poke. Eventually, he let me pet him. And in the field, he learned to come.

The other dogs befuddled me. Alaskan huskies are a motley collection of color and design. Some have flop ears, some have points. Some have fur as short as a lab’s, some have thick, luxurious coats. Some have almost rounded snouts and blocky heads, some are streamlined and aerodynamic. They span the gamut. I was supposed to learn the names of all one hundred. It seemed impossible.

Now, after years of working at various kennels, and after working at a dog daycare where I had to memorize dozens of new dog names on a daily basis, this dilemma seems funny. Dog faces and bodies look as distinct to me now as humans. Or maybe more so. A dog carries her personality in every fiber of herself; in her walk and her look and the way she lays down. A dog is fully herself, always. Now, over all this time, I can remember the name and face and feel of each dog I’ve mushed with. The team dynamic is so pervasive. When you mush, you are of each other, you are part of a greater whole, and your identity is formed up with that collection. So you recognize your teammates the way you recognize your own hand. Of course that is who it is.

But I hadn’t yet mushed with the dogs in the field, and I wasn’t practiced in learning their faces. It took time, then, to learn them. I memorized their names with mnemonics, with a checklist of traits. Ranger is confident and loud; F150 has one ear that points and one that has the slightest half-flop at its peak. Martin and the handler, Andy, suggested making notecards. I was stubborn and refused; but I kept the checklist in my head. For me, then, the dogs were just a crowd of unknowns. An aggregate of traits I could winnow down to arrive at the right moniker. Wonderful, glorious– But strangers.

Those days in the fields feel edged in wonder to me. The light of autumn was gold and crisp and ready. Each skill I learned imprinted on me. I wanted to absorb it all. When I need to remember back to a good time, that year is the year I go back to. The memories are sharp and rich. I can feel the dogs and see the open air. This first year is my definition of heaven.

In the fields, Andy taught me to play frisbee. We walked long miles with the dogs, winding in and out of the different landing strips, or driving fast on the fourwheeler, gauging the speeds the dogs could reach.

Into the gold came gray: a welcome cloudiness and coolness that presaged our transition to four wheeler training. I learned to hook the dogs up, to run them one by one to the line where they screamed and jumped and demanded to go. I rode on the back of the four wheeler and Andy and Martin imparted snippets of wisdom. “Remember when you make a turn, always look back at the intersection so you can remember which way to go.” “Don’t let their tug lines get too wrapped up, sometimes you have to stop and untangle that.”

When we’d hook up dogs, we had a list of who was going and where they’d run. Kira in lead, Fisher in swing. I realized as I trotted to harness a dog that I was memorizing where their houses were and not who they themselves were, what they looked like. I tried to stop looking at the names at their spots, and look at them, see the dogs themselves. Remember how they looked from behind, the most common view I’d have going forward. I got better. The dogs made more sense to me. I talked to them as I scooped their circle, pet them and looked at them and scooped pretty slow. (Martin said he didn’t care how fast or slow I scooped as long as I picked it all up!)

The snow came deep enough that we could finally pull out sleds. I’d be running yearlings that year, and the young dogs were becoming my friends, my companions. My fellow learners. Midnight and Aurora and Luna and Shadow; Logan and Elias and K2 and Hunter; Yoda; and my stolid veteran leader Poydras, with distinctive eyes and one ear up and one down. This would be my first team, the team I first raced with, my learning team. I remember each of them now, though they are all long gone. I remember their feel and their faces and they way they ran. I saw them; I learned them. Not just their names, but them. I gave my heart to them without any reservation, and I fell in love.

People ask me how I know the difference between my dogs, how I remember so many names. Now the question seems absurd to me. These dogs have all of my time, all of my heart. I recognize their shoulder, the corner of their ear. I recognize their smell and their feel. We are of each other. I love them. I loved them all. Not just mine, now, but the ones behind me too.

I carry their names with me, all of them that I worked with. Not just at Martin’s but at all the other kennels. Rollo and Eagle and Condor and Indy and Hero and Reese and Milky and Ani and Obi; Tater and Mudflap and Remy and Tuff and Roadie; Quigley and Juneau and Griz; Skor and Ophrah and Bolt and Hermi and Tundra and Hooch; Yoshi and Willow and Stormy and Felon; Aniak and Kodiak and Harpoon and Ruger and Yonder and Clyde and Grumpy and Bo and Luke… I can’t name them all here, they are too many. But I remember each of these faces, each of these bodies. The paws and nails and teeth of each. Little bodies buzzing with a common desire to run, to run, to just run. Some were shy, some were fierce. Some were goofy, and some embodied dignity and poise. All of them were open, were full of love. The shy ones took work to get there, but underneath their reservation was the same core of love. Love of running, trust and love of me. I never deserved so much love.

By the time I learned that, by the time I understood dogs and let myself join in their packs, “names” were just a formality, just an afterthought. Easy. Names were the result of knowing. To know someone, to really understand them, I think you have to love them. And then, when you love them– How can you not know their name? 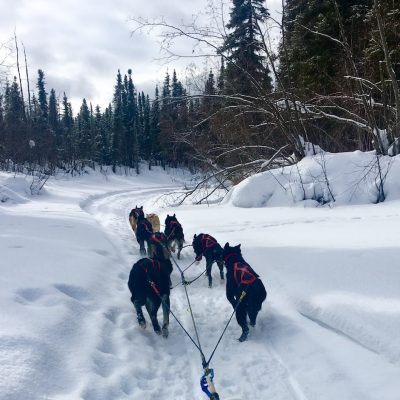 Ever feel that weird sense of anti-climax where you missed some kind of big event... 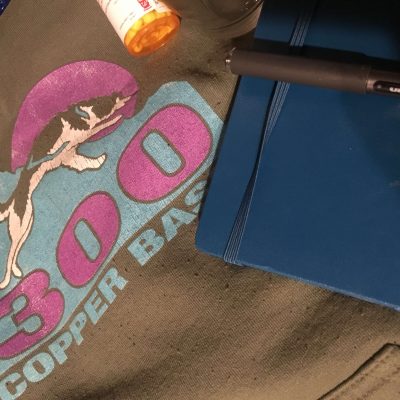 This morning, the neighborhood erupted into a chorus of excited barking and howling as various... 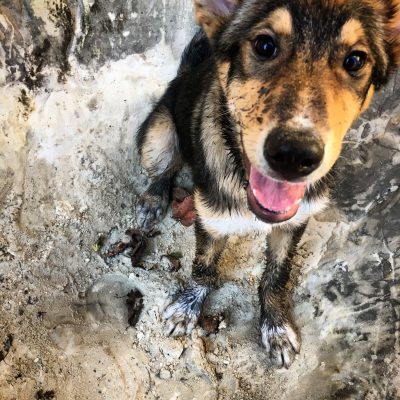 It’s hard to believe this is all happening sometimes! Outside, the pups are in a...