It is raining right now in Willow. 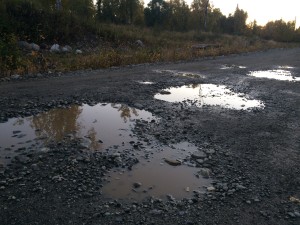 That isn’t entirely unusual, for this time of year. And really, for the first week of my first Hitch, it’s been pretty dry. But the wet has rolled in the last two days.

Let’s discuss shoes. They’re important. Each adventure constitutes its own footwear decisions. I’ve been enjoying Lisbet Norris’s #musherfashion Instagram posts. She’s able to pull off the “fashion” part of it better than most (me especially included). This time of year is always a good time, trying to determine what will be the most “waterproof.” That’s in quotes because the success rate is not 100%.

When I started my hitch (a week ago exactly!), I was wearing some approach shoes that Roman gave me. I don’t even know what brand they are (I’m sure Roman can testify on this matter), but they are what I’ve worn all winter to hike in. Earlier this fall I ripped my big toenail clean off. Yay for moving furniture! So, I’ve had to be a little tender with my right foot. The approach shoes have a protective rubberized toe section. I’m shaming all the climbers out there– I know there are terms for this, I just can’t even remember what they are. Anyway, the approach shoes are fairly waterproof and my feet feel comfortable in them.

I have now officially destroyed them. Structurally, they are still very sound, but they have now been imbued with the wondrous smells of a dog yard in autumn. So, wet and very stinky. By day two, I put them up to dry and switched to my Xtra Tufs. Any Alaskan can tell you about Xtra Tufs. They’re great shoes– but not as good as they used to be. They used to be American made, and held up forever. Now they are manufactured in China and have a tendency to wear down. My very first pair of Xtra Tufs (American made!) I purchased in 2006 to work on a fishing boat in Kodiak. They held up under considerable wear and tear until my summer on the glacier doing dog tours, at which point they finally gave up. On one of my first weekends down from the glacier, I bought a new pair (China made), and they have already bit the dust. There are holes at all points of movement, mostly around the ankles and where my foot bends near the toe. They’re still kiiiiiind of waterproof but not at all if water gets near the holes. It requires some strategery to avoid sinking the ship.

Mid-week, the world got a little cooler, and I opted for footwear item #3, a pair of Sorel “hipster style” boots. These are the type that were functional before fashionable. Roman’s Mom, Sheila, gave them to me and I used them all last winter. They are perfect yard boots, rubberized around the foot, easy to move in, and easy to throw on and off. And, after about four days of abuse in the mud and rain, they now also stink pretty bad.

As mentioned before, Scott and I are stationed at his good friend Russ’s house. His house is super nice, and we try not to make it smell too badly of the dog yard. So I have a routine where I keep my soggy, disgusting dog clothes in the garage/shop and wear a pair of tennis shoes and my bottom layer from the house to the shop and back. It is always a joy to pull on a pair of soaking Carharrt bibs or rain pants. In the shop, there is an assortment of items hanging up to dry, including my own wardrobe.

Only in the last two days, when the rain has really stuck around, did I have to cave and don rain pants and a rain jacket. The jacket is Mountain Hardwear (at one time it was really nice!) and the pants are North Face. Since I’m short, I inevitably end up walking on the backs of my pantlegs, once they slide down around my boot heel. The North Face pants have velcro for the ankles– but today I decided that is a pretty lame set up, considering how poorly velcro performs when it’s soaked. Otherwise, the pants and jacket both keep me fairly dry, for which I am grateful. At one point in my life, I was super resistant to anything resembling waterproof outer wear. (Why? Who in the world can say. A Will Stubborn Moment.) This included when I worked on the fishing boat. I would work in the rain in my hoodie and be wet all day. Strangely, I had a lot of colds that summer. Now I am old, both wiser and less interested in unnecessary discomfort. I wear the rain gear. It helps. 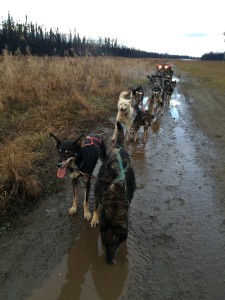 My hat, incidentally, is my pure wool hat that I’ve had and mushed in in years. It’s very retro, red, white, and blue striped. So, I just looked at the tag, and apparently it’s a “Meister” hat, and it turns out this is from a company(?) called Hagemeister-Lert which made ski clothes in the 60’s??? Interesting, I may have to find out more about this later. I bought this hat in Minneapolis from a thrift shop.

Today is the day off for the “big guys.” I’ve been running the veteran dogs as one group, and the pups in another (with two veteran leaders). Mostly we’ve had great success. This time of year gets really repetitive and dull, but so far it hasn’t lost its shine for me or the dogs. I’m sure the rain will start to get old for us all. For now, it’s good to have nice puddles to drink from(!), and I’m gonna keep working the rain-wear.

Who knew this would turn out to be a post about clothing? But it’s an important part of the who deal, so there you go.