I started mushing when I was 14. I had wanted to a long time before that. When I was seven, when we were moving from Wyoming to Alaska, I told everyone I knew I was going to be a musher. I’m not even sure how I knew what that was. In high school, I raced the Jr. Iditarod three times, and dreamed about bigger races. I don’t remember learning what Iditarod was. I don’t remember a time when I didn’t want to run that race.

This page is called ATAO. It is about my journey to run Iditarod, finally. ATAO is a mistaken acronym— it’s supposed to mean “All the Doors are Open”, but in true Will form, I forgot the D. I like it better without: maybe it’s about closed doors being gone. ATAO is something that’s been in the back of my mind for years now— first as just an idea, then as a quiet name. ATAO started as just me and my partner in crime, Hooch, who I hoped would lead the way over 1,000 miles. I liked to call us a six-legged racing team. Our journey took us a bit longer than we hoped, but I think we’re finally doing it the way we need to.

After a few races together (Hooch led the team with me as we took 13th in the Copper Basin 300 in 2016 with Red Dog Racing), and some other plot twists, we now have Ophelia, Hooch’s daughter, and a few other team members to join the way. Here’s part of the story of how.

I had worked for Judy Currier in 2012. While I was there, she had a crazy dog who had just had puppies. The dog was named Hooch. She was skinny as a whip and had ears like a donkey— wide, satellite dish ears that stuck straight up. Judy thought Hooch was the best dog she had. I found her fairly annoying. Hooch didn’t care for me much either. Regardless, she was one of my leaders in the Northern Lights 300 that year. She only got one stint up front, leave the Yentna checkpoint for the return journey. It wasn’t a long career up front that race. After about a hundred feet on the trail, running by the checkpoint on the way out, Hooch and her running partner Tundra opted to veer off course and dive into a giant pile of raked up straw, pulling the entire team after them. I put an older leader I knew better up front and we finished the race with Hooch in swing.

Two years later, last fall, I heard from Judy that Hooch was up for sale. We hadn’t been the best of friends before, but she was a great dog. I bought her and was terrified. I had nowhere to reasonably keep her, and no idea what I’d do with her in the winter.

Judy told me I should talk to Scott Smith, a musher I’d heard of but didn’t know well. He was planning to run Quest and Iditarod. I talked to him about a place for Hooch for the winter, and ended up helping run dogs, too. I liked the way Scott worked with his team, his running philosophy and the way he cared for his dogs. He was looking for someone to help handle for the Quest, and I agreed.

That race ended up being foreshortened, and Scott and I ended up being stuck in a degrading truck together for something like two weeks, almost without a break, under massively stressful conditions, with the truck breaking down and things falling apart. You know you can get along decently with someone when you go through that without killing each other.

But, handling usually isn’t very lucrative, and as things go, one ends up needing money one way or another. Right after the Quest, I started a job with an amazing company, Out of a Jam Solutions; a job that was interesting and flexible and growing. Technology is a field I never really expected to work in, but which satisfies some perverse, puzzle-driven side of me. I thought I’d be unhappy if I didn’t work outside, with my hands for a living. I think this is the exception to that rule.

Scott and I struck a deal where I’d help him handle part time, and Out of a Jam generously agreed to let me work 2 weeks on and 2 weeks off. I was lucky to help Scott train a team (with Hooch in the roster) who ended up taking 10th in Iditarod. Pretty incredible.

That summer, some big life arrangements changed, and for my own mental health, I took a hiatus to do some serious thinking. Between my job at OoaJ, and my arrangement with Scott in Willow, I thought I had it made– But I realized over the last year that even though that door was open for me, it wasn’t the right door.

I’ve loved the mushing community up in Fairbanks since I worked for Judy (and first met Hooch) in 2012. I’ve wanted to go back there for half a decade. Winter seems to hold better there. It’s where I’ve wanted to set up my own kennel from the beginning.

The words “All the Doors are Open” came to me like a vision in the middle of seizures in the middle of dark times in the middle of college. I guess it sounds crazy to explain it like that, but basically a voice came down from the heavens and told me this. This kind of explains it better. At the time, the words meant nothing. I was actually kind of irritated, then, that this is what the gods had sent me. But since that time, the words have stuck, and I’ve found them to be truer and truer in my life. A lot of the time, what I expect on the other side of an open door isn’t what comes to be— but it always leads to more open doors, and it almost always is better than what I could have come up with.

To me, this series of open doors, this long and twisted way I’ve been following, has been to Iditarod. The truth about Iditarod is that all the doors ARE open. And I feel like I’ve finally found the right one. 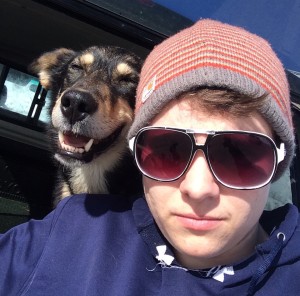 The thing about the idea of All the Doors being Open is that the ones that swing wide are always the ones that surprise me. For instance, this initial door of the idea of this set up led to a few doors that I had to knock at. This isn’t what I expected. I thought I had my route, my door, my option dialed in.

But all the doors did swing open for me, and I’m incredibly grateful. If you think ATAO is interesting, you can share us on Facebook and Twitter and Instagram, too. You can also support the building of ATAO this winter, if you want.