This fall is the start of our third season mushing here in Two Rivers as ATAO kennel. Around this time in our first season, we had 5-6 dogs ahead of the four-wheeler. Now we have 15 dogs (including 4 of those original group!). This team is made up of strong, seasoned athletes who also happen to be all female. I am beyond excited for how they are going to do– how we as a team are going to do. 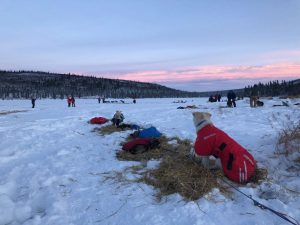 I was proud of our work last season, and deeply proud of my little group of dogs who did so well for their first (mostly yearling) run in the Copper Basin. This year, they and I are ready to push harder, to test the limits of our own capabilities. Already as a team, this group shows off their know-how. They trot together with confidence and pride; they are skilled and they are more certain of what they can do than ever before.

As usual, I, the human, am the limiting factor. The dogs are ready to run at any moment. Ready to push, ready to travel further and explore more. Me and my frustrating human brain are all that holds us back. Who decided it was I who should be in charge?? I would be better as a dog in the team, if I had the legs for it. But this brain got stuck in this body, so we’ll work with what we all got I guess. 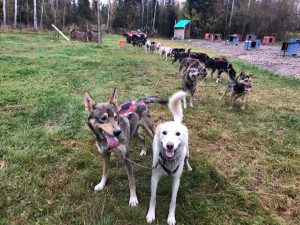 The season starts with a cavalcade of things to do. So Much To Do. I have enlisted a wider team to help me accomplish All The Things. Each year I see more and more clearly that bringing a group of dogs successfully to Iditarod is not a solo venture. (It’s tough, because I *have* seen people do it solo, but to be honest that is a far and few between thing, and even they will tell you that they couldn’t do it without community or family or xyz behind them.) I need help to get to the start line– and then hopefully I can live up to that whole team, to the dogs and the people and everyone, and get us to the finish line. So, anyway, part of the enlisted team helps me organize and prioritize and get things done. In the first two weeks, it feels like an uphill battle. All of my plans and dreams of schedules have been narrowed down to one thing I can do per day. I am exhausted but not rightfully so, it seems. I sleep plenty, compared to how much I’ll sleep later. I should be fine!

What I have managed to do is to stick to my mushing schedule, for the first seven runs. Even when I try to negotiate myself away from it. This, I think, was my biggest misstep last year. The thing that could be most improved. Just getting the dogs on the trail more. Sticking to my run plan. Every other single thing may fall by the wayside, but the steps the dogs need must come first. Especially if we aim to run the races we’re aiming for.

The other factor of the start of the season is the cost. Fall is the time when all of those factors bear down. Race entry fees, the bulk purchase of food and meat, gear and supplies for the season, straw, etc etc etc. This summer, the folks who have followed and cheered us on made a few huge things possible: 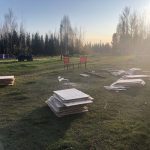 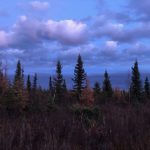 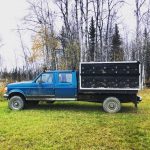 Now we’re heading into crunch time for the race season. We have some big purchases we need to complete in order to make it to the start line of the races we hope to do. If we don’t raise all these funds, we have the means to get to the YQ300, our main goal. We have an awesome Patreon following, and this gives us the baseline for the dogs. So we’re not in a situation where without more funding the dogs won’t be okay. If we were ever in that situation, we’d make drastic changes. The most important thing is just the *dogs.* Races are a really fun awesome thing, a way for us to work together in a specific mode. But if we don’t race, we’ll all be okay.

The support you’ve given us already means that we should be able to do the Quest 300. But! We really want to complete two other races. One is the Copper Basin 300 again. I want to run this race because the dogs have done it once already, and I think it will be really healthy for them to go over the same course. I think it will build up confidence in themselves. Like, “Oh yeah! We did this before! We totally got this!” Building that confidence two weeks before the Quest, I think, can be a really useful tool to help us complete the YQ300 the best way possible.

There’s another possible race coming up this season put on by Alpine Creek Lodge. We’re really hoping to participate in that. One, because the Denali Highway is awesome… But two, I’d like to get this race done for a weird reason. Probably an overly cautious reason, but I’d prefer to circumvent any issues.

To run Iditarod (remember that’s our Big Goal, to happen in 2021), you have to qualify. Qualifying, in this case, means completing two 300 mile + races and one 150 mile + race (in other words, at least 750 miles of qualifier races). Now, I’ve done that many times over, but… Not as “Will.” I don’t know that the ITC will give me any scat for having raced as “Will” previously, but I’d really love to not even have to worry about that, by just doing the course of qualifiers this year. So if I am able to do the CB300, the YQ300, and the new Alpine race if it comes about (they have both a 150 mile option and a 300 mile option, rumor holds), I’d be all set, and wouldn’t have to worry about detailing which name I raced under. That would sure be nice.

Not only would that luxury be afforded me, but it would be a really excellent training season for the dogs leading up to The Big One next year. To be able to put back to back races on their experiential palates would be fantastic for building up their confidence. Dogs are amazing. They have the ability to do these things athletically, especially when you put the physical training and time in with them. But a team has a sort of pack energy / mind and confidence is really important to that mind. Teaching the dogs they can conquer anything is key from day one. That’s why we do free play and negotiate new and different scenarios. That’s, to my mind, one of the most important benefits of racing as training. It teaches the dogs (and also the musher!) that they can overcome weird new territory, tiredness, BIG hills, water crossings, and any other obstacles that come along. Racing gives the whole team a weird kind of super-power. Once you race you start to really believe in yourself. The whole team feels this. Mushing a team after it’s raced a big race feels like sitting on a carpet that just learned to fly. It’s incredible.

So… That’s all my reasoning for hoping to build up a big race season. But to do that, we need a few things to happen.

So totals on that front put us at $9,150 on the low end and $10,200 on the high end. Good god I just broke out in a cold sweat, that’s definitely not what I was expecting. But I am terrible at math. I don’t know if we can possibly raise that– And again, if not, this is not making or breaking the kennel. We are still doing what we love and the dogs are happy, healthy, and awesome (I’m biased).

The signup for the CB300 is on October 5th. If you feel like throwing some bucks our way (and we know, you have, so much, already), you can do so here. If that’s not in the stars for you, share us around to your friends– That’s a huge help.

Thank you for everything you’ve already done. Thanks for following us, cheering us along, and watching us grow. The other part of not being solo is that we absolutely couldn’t do any of this without you. Thank you for being part of this team.