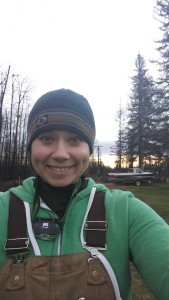 On Wednesday, my college roommate from ten years ago arrived in Alaska, and jumped with both feet into several days of mushing. I met her at the Willow Community Center (which I kept forgetting to tell her is where the Iditarod restart happens), and showed her to the kennel. She stayed at Red Dog Racing for three days and two nights, and learned some of the ropes.

Bonnie, who is one of the leaders at RDR, got an abscess this week. This happens from time to time– most likely she ate the top of a plant and the seed worked its way into her cheek. The body’s defenses kick in at this point, and swelling occurs. Poor Bonnie looked a bit like a chipmunk with one cheek full. I had started the process of soaking the abscess to bring the swelling down and get it to drain when Christine arrived. She got to participate in this process several times a day! Christine or I would get hot water and hold a compress against Bonnie’s cheek every few hours throughout the day. Some people may have been intimidated by this, especially since basically she arrived at the kennel and I had her do this. But Christine was totally unfazed and dove right in. She also scooped poop, helped harness yearlings, wrangled wayward dogs, and generally got very muddy. It was amazing. I don’t know if she was bargaining for such a hands-on Alaskan experience, but by the end of it she had done herself proud. I told her I’d definitely hire her as a handler, but she opted to return the the warmer Minnesota climes (hopefully warmer, but lately winter hasn’t been working the way it should be…).

Meanwhile, it’s the last full day of my first “hitch.” It’s been a busy time, not necessarily just because of the kennel. As I transitioned in work from my full weeks of work to just two days in the office, there was some juggling. As always, Out of a Jam has been unbelievably accommodating in working with this crazy plan. I also had some running around to do getting ready for the transition to kennel life. This meant a lot of days where I was off base during the daytime, but had plenty to do to keep the kennel moving in the morning and at night. Mushing necessitates long nights and little sleep– I’m not there yet, but between mushing and life, the first hitch has started out with some good hectic preparedness. 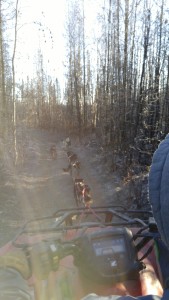 I’ll do a final run with the “big guys” tonight, and then tomorrow Scott will take the reins. We won’t see each other, because I leave for work in the morning, and he arrives from his work in the afternoon. We’ll meet in person next weekend when I head out to touch base, work around the kennel, and see where we’re at with training.

Incidentally, it’s Scott’s birthday today! He doesn’t have Facebook, but if you wish him a happy birthday, I’ll be sure to pass it along.

Finally, I’ve been doing some work on red-dog-racing.com, thanks to Lev Shvarts who built the site and who has been super graciously helping me edit it a little bit. There is more to go, but soon we’ll have a page where you can learn about each of the dogs at Red Dog Racing. I’m also going to be writing about each of them here.

I’m so, so excited to be on this path. And, I also have no perception of it, at times. There are days and nights where I am mostly just mucking about in the mud, wishing the ground would freeze, and looking at dog poop once again. It’s been amazing to hear other people’s excitement, because it reminds me of how cool what I’m getting to do actually is. Thank you, for your enthusiasm, your interest, and for reading this!

Now for the hitch that is actually the “Out of a Jam hitch,” but which I’m also going to call the “Netflix hitch.” The internet at the kennel isn’t quite robust enough for binge watching (not that binge would come into it much, since when I lay down I fall asleep), so I have some shows to catch up on (let’s not kid ourselves: when I’m not working or catching up with “off base” duties, I’ll lay down, and when I lay down, I’m still going to fall asleep).