In the course of mushing, there is an important rite of passage. I have already done this rite of passage. Luckily I can still count on one hand the number of times I’ve done it, and I don’t intend to increase that– but since I want to keep mushing for a while, it’s likely that I will increase it anyway. And, I added another notch to the belt of stupid yesterday.

The rite of passage, of course, is losing your team.

We’ve had lower snow conditions, which is why we’ve been mushing smaller teams. The problem isn’t easy passage of the sled, or even that the sled goes too fast (though it can). The problem is the ability of the snow hooks (our anchors that dig into the ground to hold the team at a stop) to stay in the snow. There isn’t enough snow pack to hold a 12 dog team. At this point, after a few weeks of minor snowfall, it’s close. Sarah and I did two 40 mile runs back to back with a short camp between on Saturday. I wanted to test them Sunday, to see if they could do big mileage. But I was also on my own for the day, and big mileage would take all day. I bootied and hooked up the full team of twelve, and we took off down the trail. In classic form, Rogue was slightly tangled when we left. I made my first mistake in choosing to stop about 200 ft down the trail to untangle her. The “tangle” wasn’t even that; she just had a leg over the gangline, which can be uncomfortable, but is also something the dogs can negotiate on their own. I should have let her do that. Instead, I stopped the team, set both hooks, and went to fix Rogue. The team was good. They were excited but in control. At least, until right when I had walked back.

There is a rule in mushing: never walk behind your sled. I am very aware of this. I did not walk behind my sled. However, to get onto the runners, I had to take one small step *past* the handlebar. I always hold my hand out when I do this, to catch the handlebar if the team “pops the hook.” Unfortunately for me, at this moment, the team did pop the hook (in other words they suddenly pulled so hard the snow hooks both came out of the ground), and my momentum in stepping added to the huge momentum of the sled going forward, and though my hand grasped the handlebar, it slipped.

And suddenly my team– excited, bouyant, exuberent, free– was cavorting down the trail entirely without me.

The team was gone. But not gone! One of the worst moments in mushing is if/when you lose your team and they are still there, in sight, running down the trail. I called whoa; I called commands. They didn’t care. They were in their element!

I weighed my options. I could go back and get a four wheeler or snow machine, but by the time I got home and started one up, the team would be AWOL, or, worse, stopped and in a big tangle. The danger here is that the snow hooks would re-hook into the ground and that the dogs would get tangled and end up hurt. There was a good chance that could happen any moment. Both hooks were down on the ground and could easily dig in. I chose to run after the team on the off chance they would get stopped by the hooks. I also began calling people as I ran / trundled along in my heavy gear. I called Shawn and asked them to meet me at a place nearby where our home dirt road intersects briefly with the trail. I started calling neighbors who live in the direction the dogs had traveled.

Funny thing about sled dogs– They tend to travel the exact same route they most recently went if they are loosed and have it in their heads to go for a run. I’ve seen this happen with loose teams and even a loose pair of dogs who broke free from lead and went for a happy run together, side by side, around the exact same loop as they had the day before.

That was good, because it meant I had a fairly good idea where the team would go. Of course that’s not an exact science and Ophelia or Nala or both of them could easily get into their heads to take a separate turn. That was the other reason I kept going after them on foot– I needed to follow the track.

I met Shawn and shed my heavy outer gear into the Subaru. Now I was dressed in light under-layers. I still had on my monster boots, but now I could run with far more ease. It was obviously disconcerting for Shawn to see me throw off all of my winter survival gear and go running away across a small frozen lake. They had a job too though: they went to another place that the trail and road intersected to keep watch for the team and/or for me.

I had gotten ahold of neighboring kennel Ryno Kennel, and Ryne and her handler Kalyn (who’s a friend of mine from Minnesota) as well as Shawn’s fellow Green Bay Packers fan Tyler all rushed out to comb the trails. I talked with them over the phone and gave them some pointers on where to look. Sure enough, they called me in short order to say they had caught the team. Later I’d learn that they when they saw the team coming, they had parked a snow machine in the middle of the trail. Ryne caught the sled while Kalyn stood in front of the team and “balled them up.” That means just getting in their way and letting them all gather together!

Thanks to these awesome neighbors, there were no tangles and everyone was happy as a clam. The dogs figured they’d just gone on a nice easy run with a weird intermission. Ryne ran them around a loop and then headed back my way. The dogs had moved at an average of 11mph when the Ryno Kennel crew caught the team. Ryne had been looking at my GPS to see if there was any record of their peak speed. Apparently not, so we’ll never know exactly how fast the team was cruising on their run of freedom. When the dogs saw me jogging towards them on the trail, they barked alert and then wagged their tails when they saw me. Classic sled dogs. “Oh hai it’s you! Aren’t we having funnnnnn????”

I was happy to jump back on the runners. We headed back towards home, where I met Shawn and hooked the team safely to our starting pole with a snub line. Shawn held the leaders while I got re-dressed in my heavy gear. I was pretty much swimming in sweat– but I could also tell my wool base layers were wicking the moisture away as much as they could! I was very grateful to get the heavy outer layers back on. The mercury was at -17 by that time.

It was vital that I get back on the trail. First of all, we had completed only 10 miles of what I had hoped would be a 75 mile run. I wasn’t sure we’d do the full 75 today, but we needed a few more miles to make the day count. The dogs were ready and raring to go. Shawn asked if we could stay and all pile into the house and just cuddle up in safety. It was their first time witnessing the stress and excitement of losing a team. Thank god everyone was okay. I was riding high on the massive relief that the team was all right. Losing your dogs is one of the worst and most terrifying feelings. Now that I had them safely together, we needed to accomplish what we set out to do. Because most of all, I needed to “get back on the horse.” I told Shawn that we needed to get back out there. I was in a window where I could either cave to the niggling fear that missing that catch had planted, or I could say eff you to the fear and get back on the runners and *mush.* I knew that if I chose to stay behind, I’d have even more anxiety piling on top of my already anxious brain the next time it was time to mush. I needed to get back out now while my head was still a bit confused, before the fear of losing a team could cement in.

We ran another twelve miles. The dogs were perfect, in sync. A strong team. The night was beautiful. The kind of night that makes you glad to be in Alaska, even as the below zero air pelts your face and your eyes, and frosts over anything you breathe on. I didn’t take any pictures– I wasn’t about to take a hand off the sled. Instead, I was just where I was at.

I kicked myself hard for losing the team. But, it’s also something that happens. Since 2001 I’ve lost my team four times. That’s four more than I’d ever like, but it’s probably not the worst track record. I am just grateful that the dogs are all all right. I would not forgive myself if something happened to them because of my stupidity. This will be a strong reminder to make sure I can absolutely, always grab the handlebar. And, I’m so grateful for the many neighbors and friends who jumped out onto the trail in literal seconds to find the team and keep them safe. I am so glad to live in this good place of good mushers.

Even when terrifying things happen, there’s only one option. Deep breath. Back on the runners. 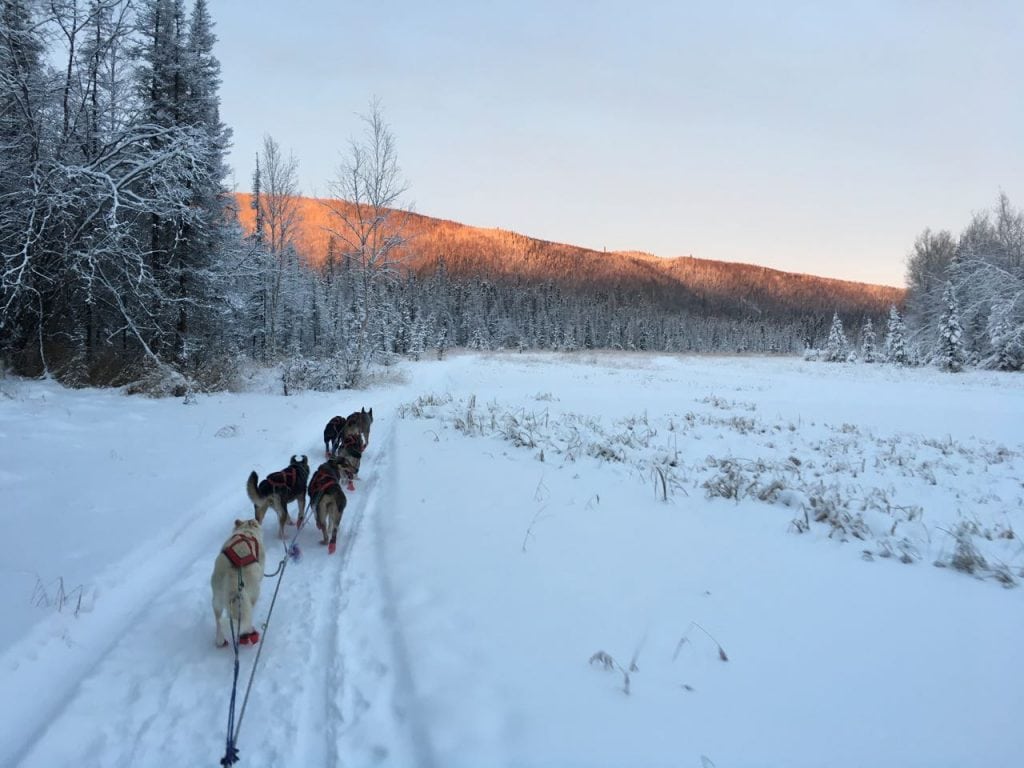